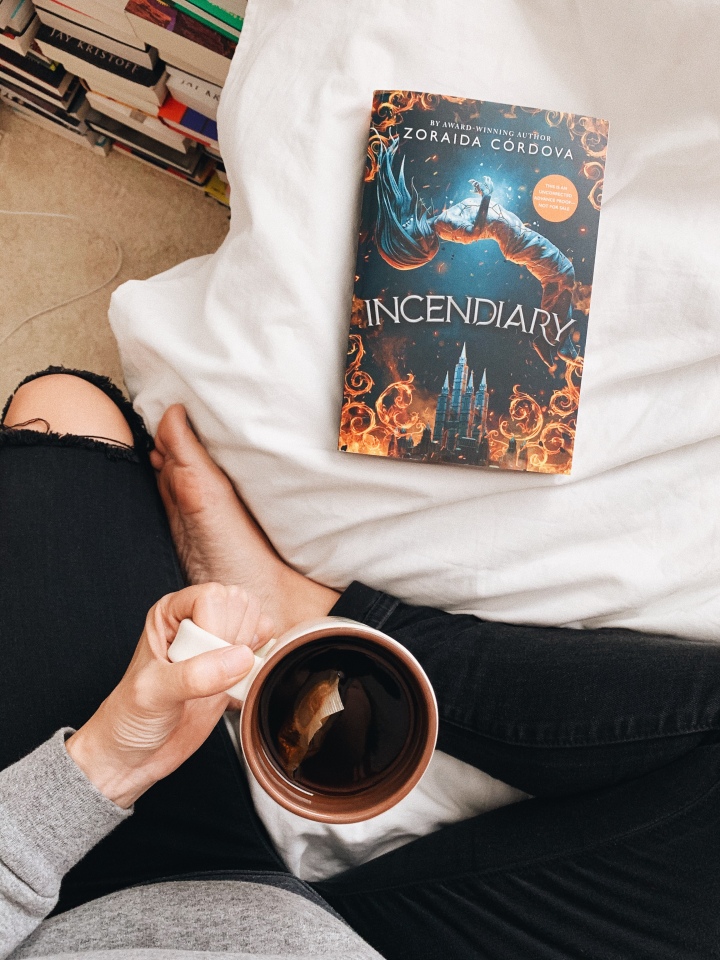 Earlier last week, I did a promotion for Incendiary by Zoraida Cordova. I was so excited about this book that I decided to read it right there and then even though the book comes out in April 2020. While I absolutely loved this book, I struggled with sharing my thoughts way too soon. However, looking at Goodreads, I can see a few folks have already read the book and since it was offered as a giveaway ARC at YallFest, some folks have already written their reviews. So, what’s stopping me?

But you know me, I need to break down this book and share with you not only the plot but the whole universe. Here’s what goes down in Incendiary.

In this world, there used to be a powerful group of people with abilities to mess with your mind. There are people who can create visions in your head, persuade you to do something you didn’t want to do, read your lies, and steal your memories. However, these people were close to extinction by an opposing group who found these magics to be a source of evil. They were slaughtered to near extinction pushing those with magics into the dark as a new King works to get rid of all the magics in the world.

Renata Convida is a young person who has the very rare ability to steal people’s memories. As the ward of one of the Royal Justices, she used her power to create Hollows; humans who have been removed of all their memories creating a hollow shell. Their deaths are eminent after being hollowed out. Renata has hollowed over 100 people before she escaped the Justice and went to live with people like her. However, the others don’t really trust her as her power to remove memories can happen with a single graze of her finger. Renata is willing to prove herself worthy to be with the other magics.

When their leader’s son and Renata’s lover, Dez, is taken prisoner by the king and sentenced to death by public execution, Renata’s friends aren’t worried. They know Dez will easily escape death. But what Dez and the rest don’t know is Renata’s accidentally took Dez’s memories on how to escape. After watching him die brutally at the hands of the prince, Renata vowed revenge in the only way she knew how; returning to the Justice she ran away from. While the justice believes Renata’s return to be a good sign, Renata’s working on the inside to find out about the King’s plans to destroy all magic people. As she looks for these weapons within the castle walls, Ren finds a much bigger truth hidden inside the palace.

When thinking about this, it reminds me a lot of Fireborne (which I read earlier this year). Both stories are about a group of people marginalized because of their abilities or because someone else came into power. This isn’t me criticizing this trope because it’s a big one and it happens often, but I love that more stories like this are popping up in the universe.

When I first read the description of this book, someone mentioned that its beginnings remind you a lot of Game of Thrones. I’m here to confirm that yes, it has this Game of Thrones quality in the beginning but that’s about where it ends. Come for the Game of Thrones, but stay for the departure from Game of Thrones. I’ll admit I wasn’t surprised at all by the twists, but that doesn’t mean they were bad. In fact, the twists made me want to read more and find out why they’re happening. Zoraida Cordova really knows how to write an intriguing novel filled with suspense and intrigue. I was definitely drawn in when the truths started coming up.

Ren is also an extremely complex character. She doesn’t remember parts of her childhood and has worked as a weapon for the King for most of her life. Every time she comes up with a plan, she runs into it without a second thought only to be captured. Her so-called friends are weary of her despite being on the same side. She has immense power, but hates what she has done with it (or forced to do with it). Honestly, she’s a wreck of a human and you’ll root for her like a mom rooting for her kid. She’s not perfect, but you also don’t care as long as she finds someone to trust and care for.

The writing style is also breezy. It’s not convoluted or overwrought with a lot of fancy language. There is a lot of world building in this story, but luckily you won’t have to remember a host of character names or remember a lot of thematic pieces. It’s high fantasy, but definitely a lot easier to read than most high fantasy.

I absolutely loved this story. Filled with people of color and marginalized voices, it was definitely a departure from the other fantasy stories I’ve been reading lately and I’m here for that breath of fresh air. I will say there are lull moments while Ren scopes out the castle looking for clues on how the King is removing magic from folks like her, but aside from that this story is so solid.

I received a copy of this book from Glasstown Entertainment for free in exchange for an honest review. My opinions have not been influenced by the publisher or the author.