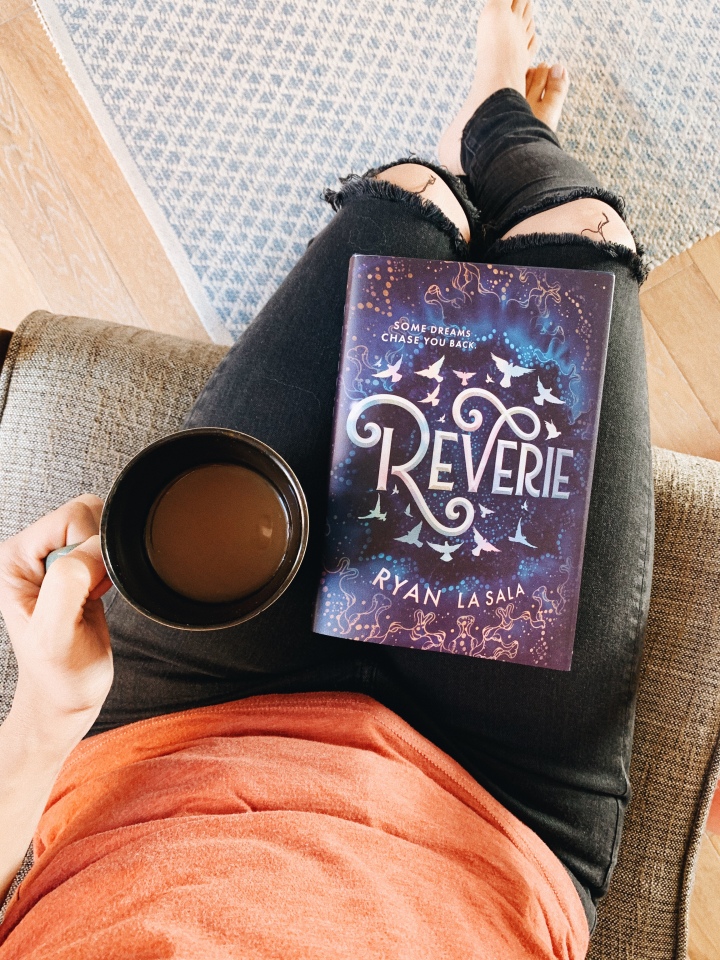 When I first heard about Ryan La Sala’s book, I was so excited. I love dreams and reality and I love books that play with the interconnection of both. So when I finally had the opportunity to read it, I absolutely didn’t hesitate. However, the proof is sort of in the pudding and this one lacked a little flavor.

Reverie follows Kane, a young guy who recently woke up from a coma when he accidentally crashed his dad’s car into an old mill. However, Kane doesn’t remember anything about the accident, who caused it, and what happened to Maxine, a woman who was at the mill at the same time of the accident.

As Kane tries to gain control on his memory, four friends appear to help piece the puzzles of his memory back together. Reveries are dreams come to life; a subconscious desire from a single entity abruptly resets reality making those within the reverie characters acting out parts. However, Kane and his friends stay lucid through the reveries fighting and suppressing the reveries and returning reality to its normal state. But when a mysterious drag queen named Poesy appears, the reveries become more than

I teetered between 3.5 and 4 stars on this one because I really liked the story, but it wasn’t perfect. For the most part, this story was great. I loved the usage of subconscious thought and desire to color the reveries. I love how Kane and his friends are lucid throughout using their powers to fight against the reverie and return the world to its normal self. While I wasn’t a huge fan of Inception, I think it’s accurate to use that metaphor to explain how Kane and his friends are able to stay “lucid” through the dreams.

But the best part is the fact Kane and his friends have superpowers. There’s this Sailor Moon-esque feeling to the story, which I’m referencing because Ryan La Sala does twice (once in the book and another in his bio). Average people who come from different walks of life who have magical powers and fights against the monsters in the reveries? Yeah, that sounds deeply close to Sailor Moon. And guess who’s Usagi? Well, it’s no other than Kane himself as he finds out more about his destiny in this mess. Each character has their own specialty and they don’t hesitate to use them inside the reveries as well as outside the reveries. I won’t say any more since it’ll probably give it away.

The action sequences were really fun to read and really moved the story forward. I will say that I freaked out when there was a giant spider/bug attacking everyone. My least favorite thing is bugs and giant bugs are definitely in that category. Yeesh! However, the story wasn’t perfect and I really wish it was. The only big issue I had is the world building. I found myself quite confused about why things were happening. There wasn’t an explanation why these reveries were happening or why Kane was chosen or why Poesy chose to use this world to create her reveries.

Because of the missing pieces explaining the world, the rest of it felt a little disjointed. Decisions were made that confused me and even new characters showed up that confused me with their existence. While you can still get through the story and just accept that things are happening, it would have made this book gold if the world was a little bit more realized and fleshed out.

Overall, this is a pretty solid debut from Ryan La Sala. I loved the little world Ryan La Sala built and I also loved the big love for the LGBTQIA+ community. It felt like falling down to Wonderland and I absolutely love that. Definitely take a minute to read his Acknowledgements at the end! I loved his writing here and I’ll be excited to read whatever he publishes in the future.

I received a copy of this book from Sourcebooks Fire for free in exchange for an honest review. My opinions have not been influenced by the publisher or the author.

One thought on “Reverie by Ryan La Sala // Book Review”