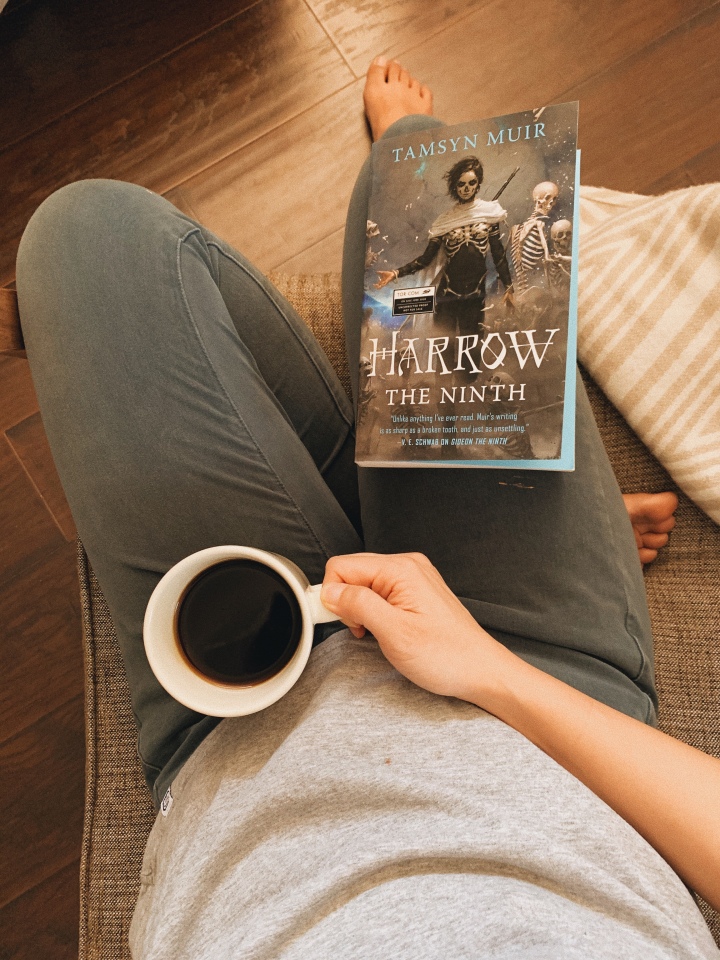 If you’ve read Gideon the Ninth and absolutely loved being confused for most of it just to have everything explained and then have Tamsyn Muir tell you that you’re basically a pleb, then this is the book for you. If you’re into nonlinear timelines, second POV, dry wit and tons of banter, then this is for you. Because Harrow the Ninth will leave you rough, ready, and ruined. I’m going to do my best to review this book without many spoilers, which basically means I’m going to explain nothing and just my reactions. Hope you enjoy!

Here’s more about Harrow the Ninth

Harrow the Ninth, the sequel to the sensational, USA today best-selling novel Gideon the Ninth, turns a galaxy inside out as one necromancer struggles to survive the wreckage of herself aboard the Emperor’s haunted space station.

She answered the Emperor’s call.

She arrived with her arts, her wits, and her only friend.

In victory, her world has turned to ash.

After rocking the cosmos with her deathly debut, Tamsyn Muir continues the story of the penumbral Ninth House in Harrow the Ninth, a mind-twisting puzzle box of mystery, murder, magic, and mayhem. Nothing is as it seems in the halls of the Emperor, and the fate of the galaxy rests on one woman’s shoulders.

Harrowhark Nonagesimus, last necromancer of the Ninth House, has been drafted by her Emperor to fight an unwinnable war. Side-by-side with a detested rival, Harrow must perfect her skills and become an angel of undeath — but her health is failing, her sword makes her nauseous, and even her mind is threatening to betray her.

Sealed in the gothic gloom of the Emperor’s Mithraeum with three unfriendly teachers, hunted by the mad ghost of a murdered planet, Harrow must confront two unwelcome questions: is somebody trying to kill her? And if they succeeded, would the universe be better off?

Before I get into any of my feelings about this book, I need to be transparent.

If you decide to read this book after finishing Gideon, just be fully aware that this book does start off where Gideon ends, but you won’t see Gideon. In fact, the story reads like Gideon the Ninth didn’t even happen. And for most of the book, you’ll think that you’ve been gipped the continuation of this story.

That is, until Tamsyn Muir reveals everything. Seriously, that bitch.

For more than half the book, I was just straight confused. There’s definitely a story happening, but the mixture of language and figuring out what happened with the first book it’s a little difficult to get into to. Let’s just pretend the first book doesn’t exist. Let’s just say that there’s a lot happening in Harrow’s head and you’re pretty much along for the ride. And then let’s add some more complicated plot devices here and there that leave you even more confused.

And yet, I loved it. I have to admit that the book was intriguing and I kept reading because I was entertained and I’m annoying where I need answers and I expect the book to give them to me.

While Gideon took place at Canaan House, Harrow takes place in space giving the book a real sci-fi theme to it. The plot is really interesting as Harrow and the others fight alongside God against these beasts set to use the thanergy in the universe and destroy everything. Despite the confusion, this part was quite clear and you’re off fighting massive heralds with their resurrection beasts in an attempt to destroy what God accidentally created. And while you’re on board this ship, you’re getting to know the other characters, the other Lyctors who went through the same process Harrow and the others went through in the first book. Again, each character has their own sense of humor, their own personality. You’ll even be laughing along with God as he watches his cohorts work and react to one another. It’s hilarious.

Of course, everything you loved about Gideon is also here. You’ve got the language that’s so eloquent and intelligent that you’ll second guess whether or not you’re smart enough for this book (trust me, you are). You also get an encyclopedic knowledge of every bone in your body. I think I know more bone names than I did before!

And there is some explanation. For one shining tiny little moment there’s explanation before being plunged back into darkness. It’s so cleverly done to make you want to reread this book and then impatiently wait for the last book and find out the real ending.

Overall, this was one wild ride and it isn’t for the weak-hearted. You’ll have your ups and your downs. You’ll attempt to DNF at every single corner, but you’ll keep going. Oh yes, you won’t be able to resist Harrow the Ninth.

3 thoughts on “Harrow the Ninth by Tamsyn Muir // Book Review”