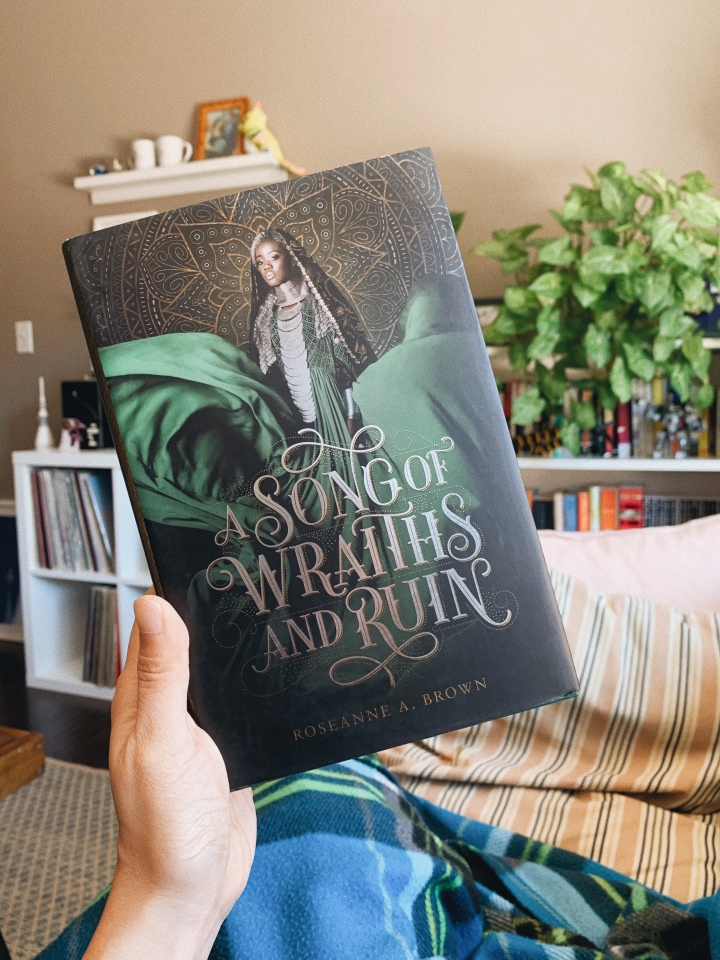 If you’re a fan of YA fantasy that has dual narratives, blood oaths, magic, a competition to win,  and incorporation of real world folklore, then A Song of Wraiths and Ruin is for you. I’m such a sucker for books that have titles like this. You know that it’s going to be one of those YA fantasies that will suck you in. Using West African folklore, Roseanne A Brown creates a world filled with magical beings, difficult decision making, a little romance, and a very complex and welcome story line.

Here’s more about A Song and Wraiths and Ruin

For Malik, the Solstasia festival is a chance to escape his war-stricken home and start a new life with his sisters in the prosperous desert city of Ziran. But when a vengeful spirit abducts Malik’s younger sister, Nadia, as payment into the city, Malik strikes a fatal deal—kill Karina, Crown Princess of Ziran, for Nadia’s freedom.

But Karina has deadly aspirations of her own. Her mother, the Sultana, has been assassinated; her court threatens mutiny; and Solstasia looms like a knife over her neck. Grief-stricken, Karina decides to resurrect her mother through ancient magic . . . requiring the beating heart of a king. And she knows just how to obtain one: by offering her hand in marriage to the victor of the Solstasia competition.

When Malik rigs his way into the contest, they are set on a course to destroy each other. But as attraction flares between them and ancient evils stir, will they be able to see their tasks to the death?

This book was so good and filled with some of my favorite tropes in YA fantasy. First off, I’m a sucker for dual narrative. Something about having multiple people telling the story makes you trust less one experience and believe in multiple people at once. It brings a fullness to the story and I think Brown did a great job including that here.

I think what absolutely impressed me was the inner monologue of both Malik and Karina. Listening to what they’re thinking and it make so much sense in the situation reminded me of a really great anime; that quick decision moment that factors in everything they realized. Or even the hasty dismissal of their emotions because of the task they need to complete. It felt very realistic. It made these characters feel so real. When narrative does that, it’s like you’re living this life. It’s completely fantasy, but it brings you into these characters’ lives.

The plot is incredible. I loved the usage of a festival including several different clans of people and even creating a zodiac of sorts to show where your true identity lies. There was a timeline and an end date which created suspense because you wanted to see if Malik or Karina would be able to complete their tasks. I’m also a huge fan of using cultural folklore and for this particular book, it’s West African. Wraiths and monsters and ghosts and dark beings are pretty much my jam, so I was loving this entire experience. I had to google a few of the names because I’d never heard of them before and that’s one of my favorite parts.

But the part that I absolutely loved is how your alignment can also define your magic. It felt like your zodiac sign helps to determine what kind of magic you’ll have. Then there’s a physical magic that lets you control real world items and a metaphysical magic that’s more like dream or consciousness control. And the magic is so cool and played a huge role in the story. I love the level of detail Brown uses to create this magical world. I love when an author goes deep on their literary elements and leans into creating what feels like real magic. I love that Brown put so much effort into this particular part of the story. I’m a huge fan of magical worlds and when there’s a complex system of magic, then I get super excited.

Malik and Karina’s relationship. OMG, YES I 100% SHIP! The struggle to suppress their emotions while stealing precious moments together is legitimately my favorite thing in the world. Two unlikely people who shouldn’t be together coming together despite it all. Their exchanges weren’t steamy, but through their experiences together you can see that there’s something building there especially with Karina’s plans.