Happy Publishing Day to all the new books out in the world! I’m so excited to bring back this blog series and highlight some of the books publishing. Of course, this doesn’t have an extensive overview of every book publishing, but I wanted to share what I’m excited about and what’s been on my radar. I hope you enjoy these picks and let me know if you’re excited for any of them either!

Today I’m sharing with you just three books. I think with the pandemic many books have pushed their release dates, so not as many books are publishing this summer. However, I think this is only the start of the wave and we’ll be seeing more books soon! Here’s what I’m excited for today:

The Extraordinaries by TJ Klune

I just posted my book review for this wonderful YA novel and I have to admit, I’m such a fan. But I’ll need to get on with buying a physical copy of this book for my bookcase. Here’s more about the book:

Some people are extraordinary. Some are just extra. TJ Klune’s YA debut, The Extraordinaries, is a queer coming-of-age story about a fanboy with ADHD and the heroes he loves.

Nick Bell? Not extraordinary. But being the most popular fanfiction writer in the Extraordinaries fandom is a superpower, right?

After a chance encounter with Shadow Star, Nova City’s mightiest hero (and Nick’s biggest crush), Nick sets out to make himself extraordinary. And he’ll do it with or without the reluctant help of Seth Gray, Nick’s best friend (and maybe the love of his life).

Find The Extraordinaries on Bookshop.org 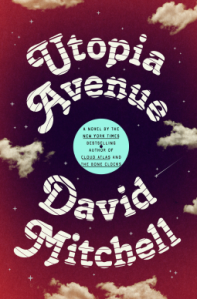 I’m not sure exactly when I became a fan of David Mitchell’s, but I am. I’m a huge fan of his twisty topsy-turvy stories mixing in literary with science fiction and the like. However, this book is not that. In fact, this book is about a band called Utopia Avenue and the hijinks they got into during their hey day. I absolutely love stories about bands especially set during the 1960s and 1970s. While I wasn’t a big fan of Daisy Jones and the Six, I feel like this will be a good alternative to that especially set in London (swinging 60s London to be precise). Here’s more about the book:

Utopia Avenue are the strangest British band you’ve never heard of. Emerging from London’s psychedelic scene in 1967 and fronted by folksinger Elf Holloway, guitar demigod Jasper de Zoet and blues bassist Dean Moss, Utopia Avenue released only two LPs during its brief and blazing journey from the clubs of Soho and draughty ballrooms to Top of the Pops and the cusp of chart success, to glory in Amsterdam, prison in Rome and a fateful American fortnight in the autumn of 1968.

David Mitchell’s new novel tells the unexpurgated story of Utopia Avenue; of riots in the streets and revolutions in the head; of drugs, thugs, madness, love, sex, death, art; of the families we choose and the ones we don’t; of fame’s Faustian pact and stardom’s wobbly ladder. Can we change the world in turbulent times, or does the world change us? Utopia means ‘nowhere’ but could a shinier world be within grasp, if only we had a map? 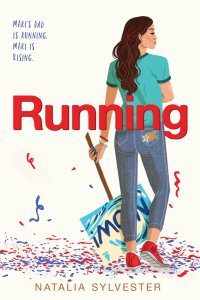 I’m a huge fan of Natalia Sylvester. I read her book Everyone Knows You Go Home a few years back and fell in love with her storytelling and writing style. I’m so excited to be reading her YA novel, Running, which talks about family, politics, and what happens when you stop seeing your parents as heroes. I have to admit, the synopsis got me. I love complex family stories as much as the next person and this one sounds really up there. I MUST READ! Here’s more about the book:

When fifteen-year-old Cuban American Mariana Ruiz’s father runs for president, Mari starts to see him with new eyes. A novel about waking up and standing up, and what happens when you stop seeing your dad as your hero—while the whole country is watching.

In this thoughtful, authentic, humorous, and gorgeously written novel about privacy, waking up, and speaking up, Senator Anthony Ruiz is running for president. Throughout his successful political career he has always had his daughter’s vote, but a presidential campaign brings a whole new level of scrutiny to sheltered fifteen-year-old Mariana and the rest of her Cuban American family, from a 60 Minutes–style tour of their house to tabloids doctoring photos and inventing scandals. As tensions rise within the Ruiz family, Mari begins to learn about the details of her father’s political positions, and she realizes that her father is not the man she thought he was.

But how do you find your voice when everyone’s watching? When it means disagreeing with your father—publicly? What do you do when your dad stops being your hero? Will Mari get a chance to confront her father? If she does, will she have the courage to seize it?