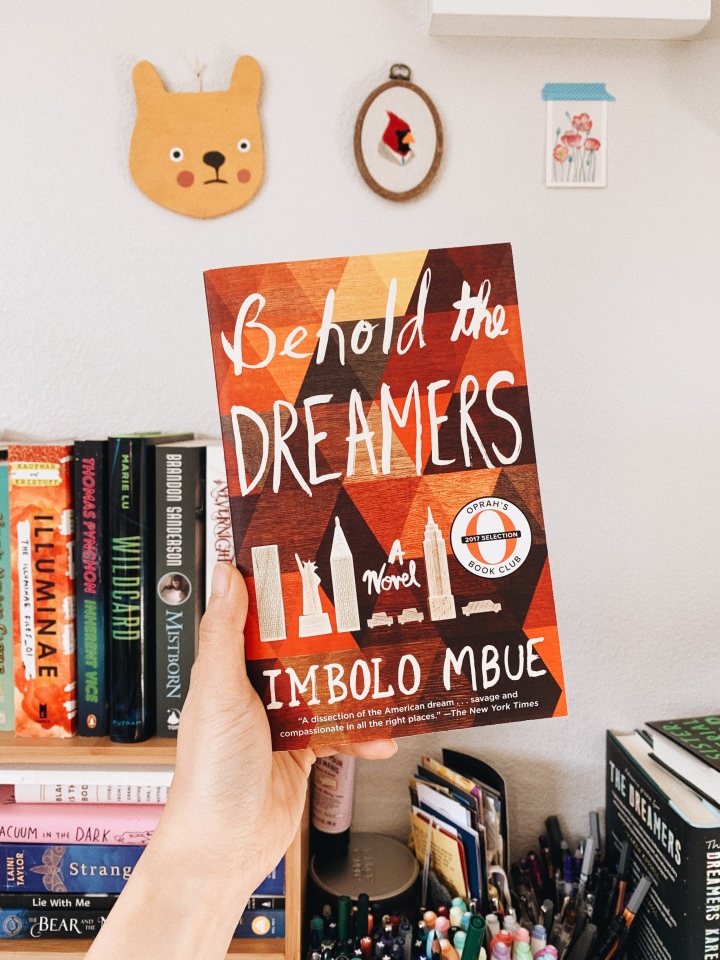 Side note: I’m really loving this book club. I mean, it’s my own book club, but I love that it’s opening me up to so many amazing books. This month’s is no different.

Also, read this on audio. The narrator does an amazing job with bringing this book to life. He does accents and voices. It’s like watching a movie and it’ll make you continue reading with abandon.

Behold the Dreamers is the story of a young Cameroonian family coming to America in hopes of living that big “American Dream”. It follows the Jonga family; Jende is the father who recently landed a job as a chauffeur for a very rich NY family and Neni, his wife, is a stay-at-home mother who also splits her time going to school. She wants to become a pharmacist; a job she couldn’t imagine having back in Cameroon. Both of them are here to pursue a new life with tons of opportunities for their children. They strongly believe that they’ll overcome their poverty and retire in ten years to a little home outside of New York City.

However, things take a turn for the worse when two major events happen in the Jonga’s life. First is the notice that Jende’s overstayed his visa welcome and he needs to return to Cameroon. Second is the Edwards family and how their world affects the Jonga’s world.

This book is more than just an immigrant story. It’s a part of the book and you see the process for someone like the Jongas. You actually see both sides of the story; the legal and the illegal. It reminded me of the arduous citizenship process my grandmother went through when I was in school. She had been sponsored by my father for a green card when I was in 1st grade and didn’t get her full citizenship until I graduated high school. I would drive her to the immigration office almost every week when the day finally neared.

But there’s also this 180º view of the Edwards family through the eyes of the Jongas. I really loved the juxtaposition of both of these families. On one side, you see what kinds of issues the super rich experience. Issues like losing your job, feeling like you’re on the wrong path for your life, and suspicions of adultery.

On the other side, you see The Jongas living in a one-bedroom apartment in Harlem. You see them try to make ends meet with odd jobs here and there. All of this while your American status is being questioned. Not to be a jerk, but it feels like the Jongas are going through more serious stuff than the Edwards. Both are validly difficult, but it seems tough when your hard work to stay in America is thwarted because you’re legally not allowed here.

At some point, there’s a catalyst between the Edwards and the Jonga families. The Edwards family starts falling apart when their eldest son, Vince, decides to move to India. The other major part is how Clark loses his job with the Lehmann Brothers during the 2008 financial crisis. There’s also Cindy’s suspicions about her husband and how her obsession with the truth turned into more bad news for Jende.

As Jende’s court hearing for immigration looms nearer, Neni starts to get desperate to stay. Both of their paths towards American citizenship changes. Jende gets really tired of the immigration system. He’s tired of waiting for court dates and hearing judges deny his family asylum. He doesn’t want to see his family live in poverty, but that’s all he can imagine for them in America. He’s slowly deciding to return to Limbe while Neni is desperately clinging to the hope they’ll be in America.

I don’t want to spoil the ending, but I do want to say that it feels real. It feels like the decision many new Americans make because their financial situation doesn’t change or they’re also tired of fighting the immigration system. Jende and Neni are better off than when they initially came to America, but to continue to stay in America means always scraping by, always waiting for court dates, fighting a broken system, and not providing as much to Liomi, their son.

I’ll admit, I was a little sadden by the ending and how everything worked out. I was happy that they were doing what felt best and coming out on top a little. I can only imagine this is the same kind of life many immigrants live, but at the same time happy to win out over a system that’s desperate for change.

I absolutely loved this novel from beginning to end. I thought it was funny and light-hearted at moments and serious and frustrating in others. It makes you consider immigration in America. It makes you wonder if life in America is all that people assume. It shows that the American Dream comes with a stiff price and that’s for both immigrants and its citizens.