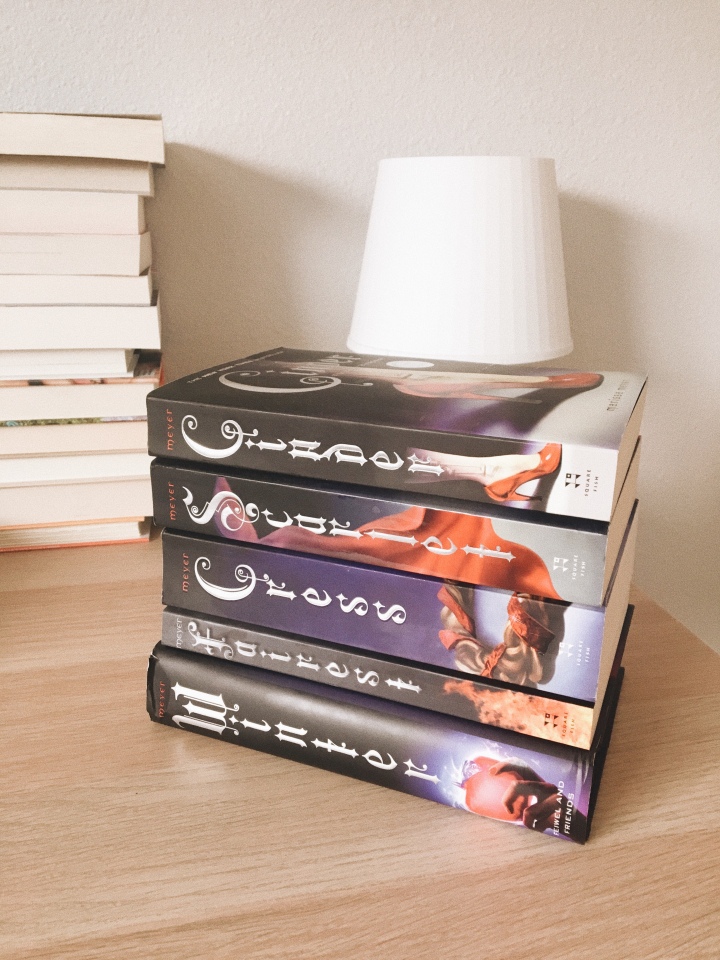 The first fantasy series I finished this year! It’s November already, so I’m not doing well but I’m happy to have read it and definitely want to chat about my overall feelings on the entire series.

To give you some background, The Lunar Chronicles is a YA fantasy series written by Marissa Meyer. It’s a modern retelling of some of your favorite childhood fairy tales. Each book focuses on one of those fairy tales, but it’s only one small part of a much bigger story being told. Don’t expect the stories to be verbatim retellings. Just imagine those parts as callbacks to the OG that put a little smile on your face when you can see it coming.

Here’s how they series is ordered:

Cinder – Cinderella. Part human, part cyborg. She’s a mechanic and can pretty much fix anything you’ve got broken. She lives with her step-mother and two step-sisters. Guess what, they treat her poorly. When she meets Prince Kai for the first time, she’s instantly in love with him. However, Cinder finds out that Queen Levana (ruler of the moon) is looking to take the crown from Prince Kai, she makes it her duty to go to the ball and warn him. The best part is that the glass slipper is actually Cinder’s cybernetic foot.

Scarlet – Your Little Red Riding Hood who pilots airships and looking for her grandmother. She meets a wolf-human named “Wolf” who turns out to be a Lunar solider intent on  murdering as many people as possible. When searching for her grandmother, she comes across Cinder and Captain Carswell Thorne (an escaped convict from the jail he shared with Cinder). Scarlet helps Cinder with clearing her name and saving Kai from Queen Levana.

Cress – Repunzel’s story except instead of a tower, she lives in a satellite right outside of Earth’s orbit. Her hair is long, but her expertise is hacking and software engineering. She’s a “shell” (someone without any Lunar gifts) who’s been spying on Prince Kai for Queen Levana. She’s really good at what she does, but she hates that she’s a prisoner and data jockey for the queen. Of course she gets saved and brought to Earth and joins the crew to stop Queen Levana.

Fairest – Queen Levana’s story. This is supposed to be a mid-point novel to give you some background on the evil villain. It does take away from the entire series because it’s not connected to what has already happened. You could probably read this at the end if you’re so curious as to the villain’s life before she became evil. I will tell you now, it’s a short life before she becomes evil.

Winter – Your little Snow White. The beautiful step-daughter to Queen Levana. She’s a little crazy because she doesn’t use her Lunar gifts. After a thwarted attempt to murder her, Winter runs away to find Cinder and the crew. She joins them on their quest to stop Queen Levana on the moon.

Wow that was relatively hard to do without getting too spoiler-y.

The books follow Cinder, Scarlet, Cress, and Winter as they try to fight against Queen Levana, the empress of the moon. Along with their male counterparts (Prince Kai, Wolf, Captain Carswell Thorne, and Jacin), these folks band together to stop a lot of different things from happening to the world. I’ve listed them:

Overall, this was a great series to get into if you’re looking for retellings of fairy tales, strong female characters, and good old fighting.

My favorite book from the series was Cress. I think I see a lot of myself in Cress and that contributes to some of my interest in this book. Like the other character she’s got a skill that none of them have. She’s important to them, but because of her isolation, she’s a little bit quirky and used to creating imaginary scenarios and characters to play. I also am a huge fan of her male counterpart, Captain Carswell Thorne. He was probably my favorite male character from the series. Unafraid of being himself, a bad boy, and in love with Cress unbeknownst to himself.

My least favorite book was Fairest. I really wanted to have some empathy for her and feel her on why she is the way she is, but it didn’t work. I thought she was more vain, selfish, and annoying after reading that one. Not sure if that was Marissa’s objective, but it did a good job hating it.

I loved how strong each of the female characters were. They all had their skills and they all got to use them in some way to help fight against Queen Levana. I mean, even Queen Levana was great despite being the bad guy.

I really loved the small nods to the original fairy tales. Like I mentioned before, they’re subtle, but it’s a real treat when you can see the poison apple, the glass slipper, the long hair and how that plays. I thought that Marissa Meyer did an excellent job blending these stories together and even calling back to them throughout each book. For example, there’s a callback to the end of Cinderella in Winter.

But I also loved that it wasn’t verbatim retellings. This felt like a completely original story basing some part of it on fairy tales.

However, what I really didn’t like were the tropes. Everything came a little too easy. People fell in love too quickly. Everyone was paired off with another male counterpart. For this last point, I really wasn’t a fan of that. I love when young people fall in love, but there were some points where it just felt inappropriate.

They’re in the middle of an epic fight or someone is trying to kill someone else, but they take a moment to kiss. Like, stop. This is not the time to do that! Also, it’d been great if some of the couples turned out to be great teammates instead of lovers. For example, I think Scarlet and Wolf would have made a great team together, but lovers? Don’t buy it.

I also found it really strange that there weren’t any casualties. Yes, people did die and minor characters were killed off, but none of the major characters did. I wanted there to be some small modicum of truth here. In a battle, people die. Friends die. Soldiers lose friends all the time in war and that should have been a little bit more prominent here especially when it’s a rag-tag team of people who are less skilled with Lunar gifts and don’t have many resources.

Overall, if I can give a review for the entire series, I would go with 4 stars. It’s good and it’s entertaining. There are some parts that dragged a little and some tropes I couldn’t stand. However, the story itself was so strong and compelled you to read more. Sadly, I’m not coming away from this series in my top five of all-time, but it was enjoyable.

You can find my reviews for each of the books below:

One thought on “All My Thoughts on The Lunar Chronicles”