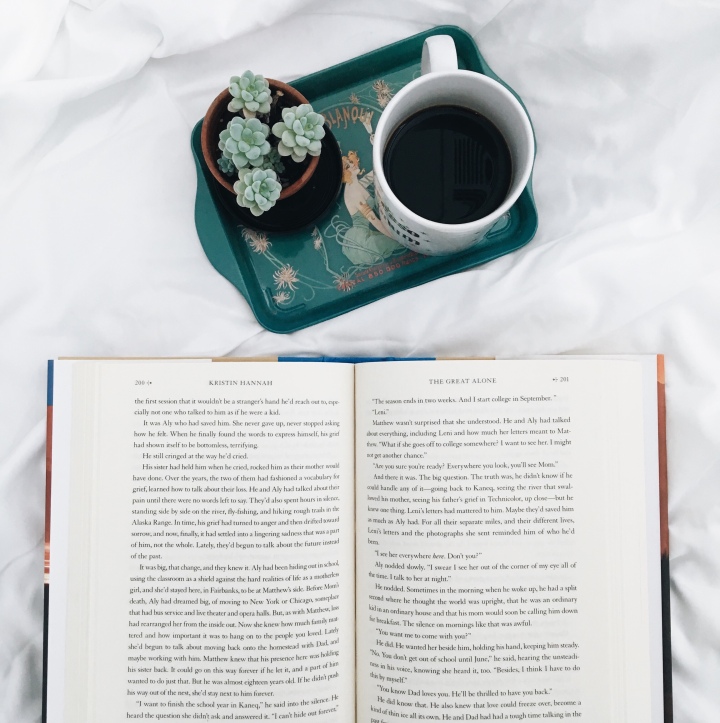 This is the second novel I’ve read by Kristin Hannah and I’ll admit I’m a bonafide fan. This book probably solidified that but I think I knew from the moment I finished The Nightingale. She does not disappoint.

Ernt Allbright, a former POW, comes home from the Vietnam war a changed and volatile man. When he loses yet another job, he makes an impulsive decision: he will move his family north, to Alaska, where they will live off the grid in America’s last true frontier.

Thirteen-year-old Leni, a girl coming of age in a tumultuous time, caught in the riptide of her parents’ passionate, stormy relationship, dares to hope that a new land will lead to a better future for her family. She is desperate for a place to belong. Her mother, Cora, will do anything and go anywhere for the man she loves, even if it means following him into the unknown

At first, Alaska seems to be the answer to their prayers. In a wild, remote corner of the state, they find a fiercely independent community of strong men and even stronger women. The long, sunlit days and the generosity of the locals make up for the Allbrights’ lack of preparation and dwindling resources.

But as winter approaches and darkness descends on Alaska, Ernt’s fragile mental state deteriorates and the family begins to fracture. Soon the perils outside pale in comparison to threats from within. In their small cabin, covered in snow, blanketed in eighteen hours of night, Leni and her mother learn the terrible truth: they are on their own. In the wild, there is no one to save them but themselves.

In this unforgettable portrait of human frailty and resilience, Kristin Hannah reveals the indomitable character of the modern American pioneer and the spirit of a vanishing Alaska―a place of incomparable beauty and danger. The Great Alone is a daring, beautiful, stay-up-all-night story about love and loss, the fight for survival, and the wildness that lives in both man and nature.

First off, I want to talk about the triggers in this book. I feel that it’s unfair not to include these especially since it’s a very serious and sensitive subject. Call them spoilers, but I’m the type of person who wants to know what I’m getting into.

This story includes depictions of domestic abuse and violence, child abuse, and mental health issues including PTSD and depression. To be more blunt, it involves a Vietnam POW who returns after six years with severe PTSD and no mindset or resources to help him get through it. He beats his wife. He beats his daughter. He drinks. He’s also pretty manic and believes that he needs to prepare his family for a communist uprising.

While the story is about this family that moves to Alaska, I think this story is about Leni, the young daughter. She’s subject to the whims of her parents and when her father tells her and her mother they were moving to Alaska, she had no other choice but to follow.

And everything seemed hopeful throughout the beginning of the story. They work to get enough provisions for the oncoming winter. They learn to hunt and fish and use what little means they had. Ernt Allbright seemed like he may have beat the PTSD he was suffering, but the moment the cold set in his mood changed too.

Throughout the story, I found myself clenching and unclenching my fists. Ernt Allbright will make you want to punch a wall or yell at the book. Every time he had a single word to say, I wanted to reach into this book and punch him right back. I wanted to take the shotgun off the wall of their tiny cabin and threaten him to stop torturing his family.

All the while this is happening, Leni is growing up. She’s in a one-room school with several other kids from the bush. She meets a boy named Matthew who becomes her best friend and eventually her love interest. She makes friends and learns skills to survive during the harsh winter months.

What I loved the most about Leni is her ability to see behind her father’s bullshit. You know there’s a lot of love there, but also some contempt for a man who promised to take care of her and her mother. As Leni grows older, she sees more of her father and how he will never be the person he was before he left for the war.

Kristin Hannah is most definitely a character writer and you will definitely read this book to see what happens to them. Unless you’re a huge fan of the Alaskan bush and want to know more about hunting and fishing, you’ll probably be reading this book for its characters. Everyone is written extremely well. You want to see if Leni and her mother escape her father. You want to see how Leni is making out living in a new part of the world. You want to know what happens to their lives and how everything works out in the end.

That’s the magic of Kristin Hannah’s writing. She makes you fall in love with her characters. She makes you think about their lives and how they’re doing and she most definitely delivers.

I think the only downside of this book is the ending. Similarly to The Nightingale, I felt the ending dragged a little. Almost every chapter felt like a bow tied to the pretty package, but then something else gets introduced. I wouldn’t say that it dragged terribly and you don’t want to miss out what happens in the end, but I felt the ending came much sooner than it did and the rest was like some long epilogue.

Also, it felt like everything came together a little too perfectly. Some parts of the ending felt like vindication for all the things these characters dealt with throughout the novel. You’re glad it happened. It’s exactly what you wanted. But then she goes deeper and finds more things to find and more heart-shattering moments in their lives. It’s like getting too much ice cream at the end of an arduous day. Or at least too much ice cream for me.

But I loved the work nonetheless. Kristin Hannah painted an amazing portrait of the Alaskan bush, created characters you wanted to see excel and grow, and wrapped everything up in a beautiful and tear-filled bow. I will admit, I did cry at the end of this one. I’ll just blame the plane altitude.

6 thoughts on “The Great Alone by Kristin Hannah”