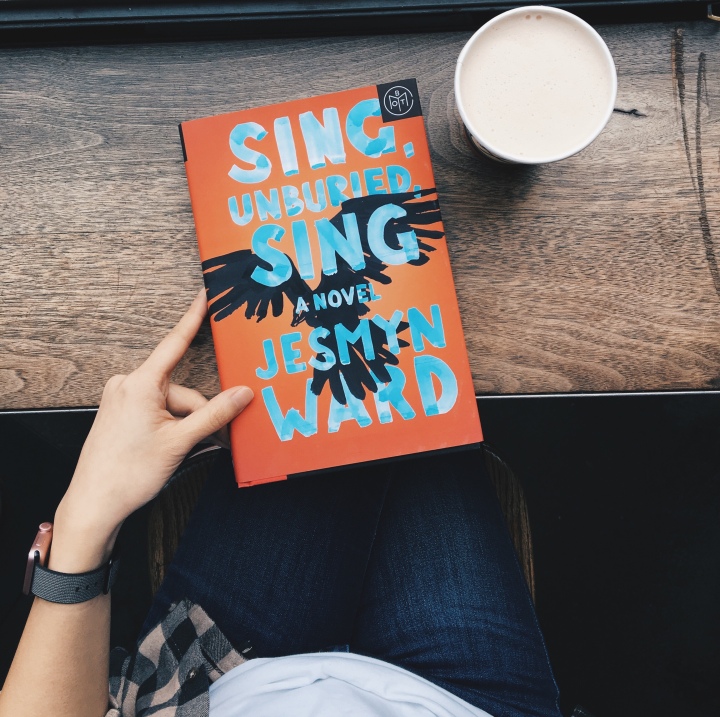 The other night, in the silence of my apartment, I tore through the last 50 pages of Sing, Unburied, Sing by Jesmyn Ward. I sat on my couch while waiting for my dinner to cook in the oven, getting up every so often to make sure my meatballs weren’t burning. Once I finished the book, I put it down and then proceeded to not think about it.

Jojo and his toddler sister, Kayla, live with their grandparents, Mam and Pop, and the occasional presence of their drug-addicted mother, Leonie, on a farm on the Gulf Coast of Mississippi. Leonie is simultaneously tormented and comforted by visions of her dead brother, which only come to her when she’s high; Mam is dying of cancer; and quiet, steady Pop tries to run the household and teach Jojo how to be a man. When the white father of Leonie’s children is released from prison, she packs her kids and a friend into her car and sets out across the state for Parchman farm, the Mississippi State Penitentiary, on a journey rife with danger and promise.

The story takes place in both Jojo and Leonie’s point of view. Each chapter switches off which tale you’re going to hear. For Jojo, you hear a lot of resentment for his birth mother. He can’t stand that she’s not the mother she’s supposed to be. Instead, she’s found indulging too much on meth and forgetting she’s ever really had kids. Jojo finds himself having to grow up much sooner than he expected, impressing his grandfather with how “manly” he is in serious situations.

For Leonie, you hear a lot about her struggle with fighting against herself. She knows she’s a bad mother, but she can’t help herself. Her grief began when her brother, Given, was murdered on a hunting trip. Given was her favorite person in the world and she never quite got over him dying. Every time she does drugs, Given comes to visit her while she’s high. You can see how that can drive any person insane.

However there’s a third perspective that reveals itself slowly throughout the story, which is the ghosts of the people who have been killed in terrible ways. Leonie, Jojo, Kayla, and Mama all have these powers that allow them to know the future, read minds, and speak with the dead. It’s not supernatural, but almost like a gift bestowed upon their family ever since they came to this country. They were given a gift and sadly, it was taken for granted.

I’ve asked numerous people what they thought and all of them felt the same. It was good, but I can’t put into words exactly how good this was. Was it the ghostly images of the African Americans who have died throughout the years? Was it the drug abuse Leonie uses to escape her own sorrows? Is it the ability to see between the veil of life and death? Was it the use of an old farm to enslave prisoners and bring back a part of this country’s history to punish them? Was it seeing a mother struggle with wanting to be one and her son taking up the responsibilities when she couldn’t?

Sometimes you find yourself with a book that is really difficult to put into words how good it is. It’s good, you know that much. But why? I can’t put my finger on it. And the adjectives other people have used to describe this book match what I feel. It’s haunting, slight disturbing, with doses of reality, sadness, foreboding, intrigue. You want to read more because you want to know more. You want to find out what is happening to this family.

However, I’m not even sure that’s the appropriate way of explaining this novel. I am really struggling with this one.

In many ways this book reminded me a lot of Beloved. The dark and densely moving story about a family who is haunted by the decisions they made in their past. How much they wanted to move themselves away from those horrors in order to live a peaceful life and how the dead can never truly rest without hearing and knowing the truth. I honestly thought this book would be about the struggle of being African American in the South, but this book was so much more.

My favorite thing about this entire experience was the writing. It was extraordinary writing. Each chapter had pearls of beautiful quotes that displayed each character’s personality and also their struggle. Each quote another example of how life is so important because death is hanging right outside the door. It was an incredibly breathtaking story that I had a hard time putting down.

I think the only flaw this book has was the pace. While Leonie and the kids are driving up to release Michael from Parchman, the pace felt slow and even. They were a dysfunctional family on the road to meet their father; whom Kayla hasn’t even met in her life. They were on the road to becoming a family again.

By the time they returned from Parchman, the story somehow picked up in pace. Suddenly, the history of their family unravels and the mystical powers they have and the ghosts that have been haunting them swirl together in the penultimate scene. Mama is on her death bed and she’s about to open the curtain between life and death so that she can die in peace. Of course you can only imagine that the door doesn’t just open in one direction.

I don’t know where to begin. I honestly just believe that you’ll need to experience it for yourself.

3 thoughts on “How do I review Sing, Unburied, Sing?”