I don’t normally include a song to go with my reviews, but the entire time I was reading this book I kept thinking of this Selena Gomez song Wolves. I’m also a huge fan of hers and well, thought it would make sense for a book like this. 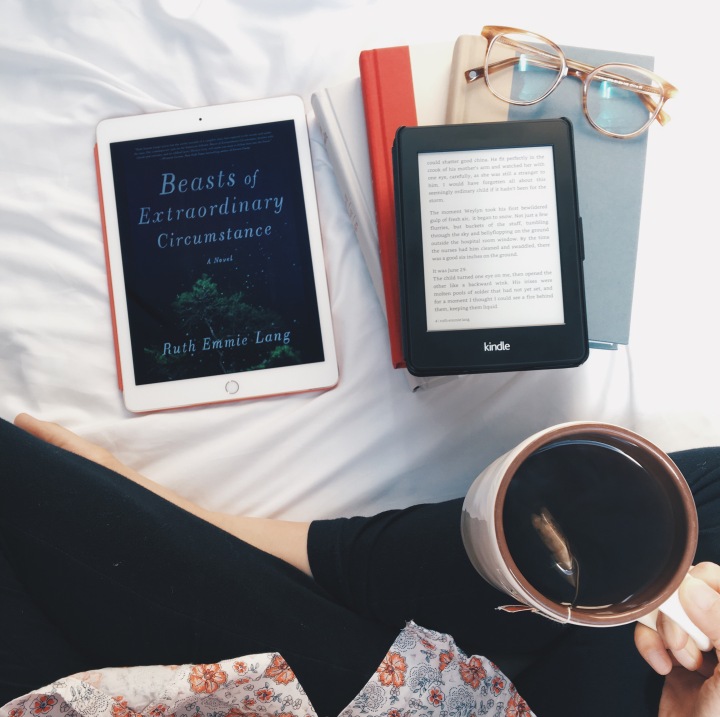 When I was younger, I would concentrate super hard on the tops of trees. I would try to control the wind with my mind and a true test of that would be to make the branches sway. I did this up until I was in my teens always believing that the wind was on my side. The day that the branches did sway cemented in me that magic is real and we all have a little bit of it in us.

Beasts of Extraordinary Circumstance is the story of Weylyn Grey told through the eyes of the people who encounter him. Weylyn Grey was born with magical powers; powers that allow him to speak with animals, grow plants, and change weather patterns with his emotions. The only power Weylyn’s ever wanted was to feel normal. When his parents inexplicably die, he was raised by wolves and only to be caught by the police and brought to live with the rest of society. You could only imagine the kind of life a wolf boy may have lived.

This book was honestly one of my favorite reads of the year. It uses magical realism to an extent that it’s whimsical. I’ve read a lot of heavy magical realism where strange things happen to people and those stories always seem so depressing. Instead, the magic depicted in this book makes you wish that magic was real. I guess in some ways, magic is always real.

The story is told in several different parts from the point of view of various different characters. Each part is from a different point in Weylyn’s life and the people he comes across. There’s always one new person he meets and they get to experience his magic for the first time. I can only imagine the awe on their faces when they see him grow a tree back or harness the power of fireflies. And each time I read a new thing he was doing, I felt like a little kid again excited to go to Disney World because that’s where Mickey Mouse lived.

I was confused at first and it might have been the copy I was reading, but I couldn’t place the timelines. It first takes place in present day, but then it jumps back to the early 90s. Then it’s back up to 2017 and it was at that point that I realized that the story begins with Weylyn meeting a new friend. He tells him his story and how he came to be and the people he remembers from that life. After that point, it was smooth sailing as I voraciously read the rest of the book.

I think the story brings out the child in you; that one little being that doesn’t remember what responsibilities are and finds the sun glittering in water to be a gift. Of course the story has its skeptics and life wasn’t all that easy for Weylyn, but the people who did believe helped him out. And I think my favorite part in all of this is that Weylyn never let the opinions of other people keep him from being himself. This goes double for the years he spent alone in the woods.

I was so surprised to see this book not get as much hype as it deserved. I didn’t see a lot of people bring it up and especially as a follower of Book of the Month Club, I was surprised that most people focused on the other books that month. Honestly, I feel like I stumbled upon The Neverending Story and I was Bastian and the only one who can know about its richness.

So I decided to look into some of the feedback other people provided. Maybe I was missing something that other people noticed. While mostly positive, I did see some comments on how the main character, Weylyn, fell flat for them. Because he wasn’t well developed or explained, people gave some negative feedback about it.

I can see where people can make that conclusion. It’s a story about a guy with magical powers, yet you find out very little about his life with the wolves or how he’s managed to live with such a power.

However, I’d like to beg to differ here. While I understand that people wanted to know more about Weylyn, I think the author purposefully left out the details of his life to keep him a mystery. The story is in the perspective of the other characters and those other characters don’t know much. All they know is a boy who can control the weather, has a pet pig, and lived with wolves.

I loved hat the author used this as a literary device to under-explain why Weylyn did what he did and what he was capable of doing. He’s just a man that comes and goes as he pleases. He’s caring and still carries the same childish exuberance for life that he did when he was a kid raised by wolves. Asking for more than that almost reveals the wizard behind the curtain. Knowing this might actually change the way Weylyn knows himself and almost cheapen the story. I’m happy to not know anything about him other than the tidbits the characters reveals. We’re all on that same journey together.

I received this ARC from Netgalley in exchange for my honest opinion. I was not paid to review this book.

One thought on “Beasts of Extraordinary Circumstance by Ruth Emmie Lang”