I’ve never seen Swing Time in full. I’ve only seen the parts where Ginger Rogers and Fred Astaire dance. Their moves are so hypnotic and envious.

However, a frequent theme throughout Old Hollywood that no one really knows about is the awful hours, the struggles to support yourself, and the drug abuse to stay up through the days of filming. It must be even more difficult when you’re a dancer doing the same routine over and over again in order to get it just precise with your partner. On top of the dancing, you need to be acting. It’s all so much!

You don’t see those hours spent rehearsing and singing and dancing. All you see is the final product, which is the story of these two girls in Zadie Smith’s Swing Time. What do I need to do to be a part of this couple? How do I get to dance like that? Life’s a show until the final curtain falls. What happens next?

Two brown girls dream of being dancers–but only one, Tracey, has talent. The other has ideas: about rhythm and time, about black bodies and black music, about what constitutes a tribe, or makes a person truly free. It’s a close but complicated childhood friendship that ends abruptly in their early twenties, never to be revisited, but never quite forgotten, either.

Dazzlingly energetic and deeply human, Swing Time is a story about friendship and music and stubborn roots, about how we are shaped by these things and how we can survive them. Moving from northwest London to West Africa, it is an exuberant dance to the music of time. 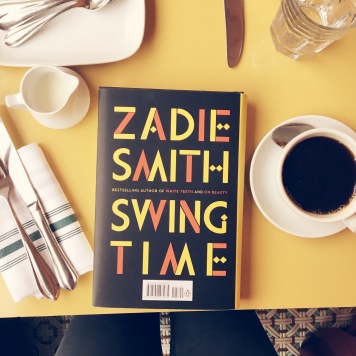 I’m going to be honest with you. I have a lot of thoughts here. This book was intensely beautiful. I’ve read Zadie Smith before and she has such a rich and complex way of writing. It’s because the writing could have been edited here and there that I felt it didn’t deserve the full 5 stars (also there were a ton of grammatical errors. Not sure who did the final proofreading, but woof). However, I think I noticed a theme throughout her novel.

The nameless main character narrates the story of her and her friend, Tracey’s, life. They both wanted to be dancers. They both envisioned themselves alongside the likes of Fred Astaire and they both dreamed of that fame. However, their lives are completely different and both of them veer far beyond their own dreams.

I think the one thing I can really point out from this story is this idea of images. The two little girls are obsessed with watching these old movies with these actors who effortlessly dance across the stage. They appear to have it all, but when you dig a little bit deeper it’s not all easy and happy-go-lucky.

The same goes for the lives of these two girls. Tracey puts this pressure on herself to be the best dancer in the world and her life isn’t in any way the life that she wanted to live. The narrator almost felt like a secondary character in the book because her life is based off the lives of others. From being a friend to Tracey to being an assistant to Aimee, she’s based her characteristics on what her friends can bring her. Her mother is just the same. Every single character portrays or wants to portray a certain life they want to live. It’s like watching the performance without knowing the actors and that’s what makes this book so beautiful.

The complexity comes from the fact that this story’s narrator. She’s our anthropologist while she observes Tracey’s life, her mother’s life, Aimee’s life, but there isn’t much of a microscope down on her own life. I wish there was some more understanding of what she does at the end of the novel, but perhaps her job is to play the unassuming observer.