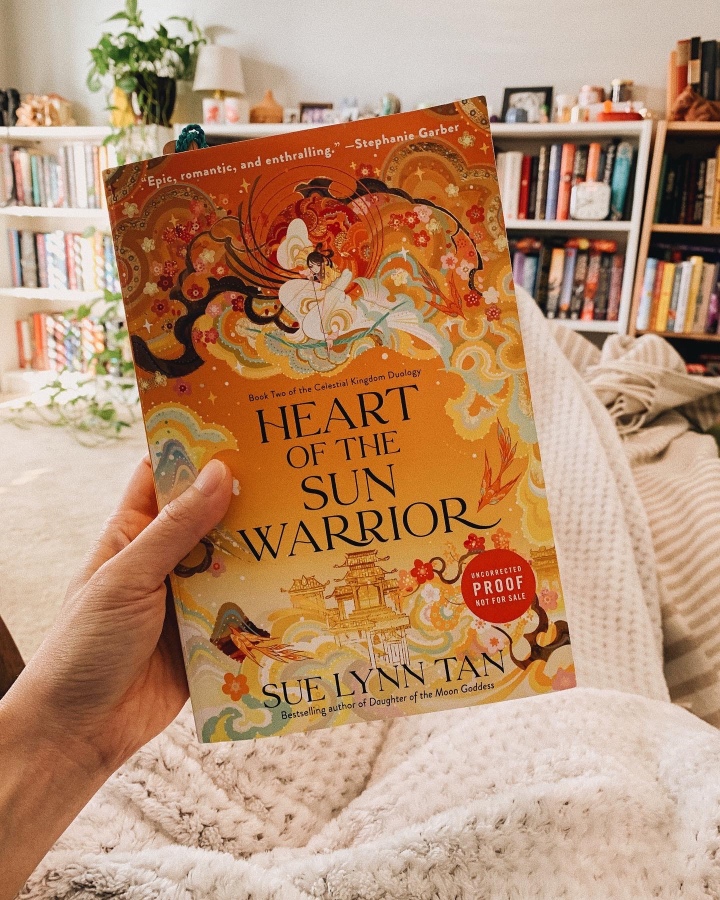 Well, this incredible series is over and I’m sad because it was exactly what I wanted. It’s soapier, it’s got more action, lots of adventures, and will make you feel all the things. Thanks to Harper Voyager for the gifted book.

Here’s more about Heart of the Sun Warrior

After her perilous quest to free her mother, Xingyin thrives once more in the tranquility of her home. But her fragile peace is threatened by the discovery of a strange magic on the moon and the unsettling changes in the Celestial Kingdom as the emperor tightens his grip on power. While Xingyin is determined to keep clear of the rising danger, the discovery of a shocking truth spurs her into a treacherous confrontation.

Forced to flee her home once more, Xingyin and her companions venture to unexplored lands of the Immortal Realm, encountering legendary creatures and shrewd monarchs, beloved friends and bitter adversaries. With alliances shifting quicker than the tides, Xingyin has to overcome past grudges and enmities to forge a new path forward, seeking aid where she never imagined she would. As an unspeakable terror sweeps across the realm, Xingyin must uncover the truth of her heart and claw her way through devastation–to rise against this evil before it destroys everything she holds dear, and the worlds she has grown to love… even if doing so demands the greatest price of all.

The stunning sequel to Daughter of the Moon Goddess delves deeper into beloved Chinese mythology, concluding the epic story of Xingyin–the daughter of Chang’e and the mortal archer, Houyi–as she battles a grave new threat to the realm, in this powerful tale of love, sacrifice, and hope.

I have a book hangover. It’s that feeling you get after finishing a really great book series, but it’s also the feeling you get after watching an incredible drama. If you’re a fan of Chinese fantasy dramas filled with flying martial arts, magical powers, and the romance, then this is the book for you. And similarly to when I watch those TV shows, I I have that hangover once its over. I want to listen to the soundtrack online and watch YouTube videos of the actors singing the songs and doing bloopers. I need the supplemental material of watching a show that I’ve become obsessed with to let that high of a great story carry on way past the last episode.

It’s going to be tough reviewing this one because if you haven’t read the first book then you’re going to miss a ton of context. If you’ve read the first book, then you know that the pace of the second one is exactly the same. Events unfolded one right after the other like dominoes set up to fall and just when you’ve recovered from one big surprise, another one happens right after. I felt bad for the people around me as I read this book in public. I was gasping and laughing and nearly throwing this book across the room because of what’s going on.

There was so much drama. Similarly to the Chinese dramas, this doesn’t skimp on it and while you’re being slung between Liwei and Wenzhi, you’re also reading about Xingyin trying to save her friends, her family, and the Celestial Empire from someone willing to destroy everything in an act of revenge. I won’t tell you the details of that (since that would be considered a spoiler), but the stakes are extremely high for this world and Xingyin and her friends are ready to fight for their world.

One feature I absolutely love about Chinese dramas is that it’s never fully clear who is the villain and who is the hero. You’d imagine that Wenzhi from the Demon Realm would be the villain because, well, he’s from the Demon Realm. But the story is much more complicated than that and I absolutely loved the winding path it takes to find the true face of evil.

But let’s talk about the romance because I know that was a big part of the first book and it’s definitely a huge part of the second book. The love triangle isn’t the central focus of the story, but Liwei and Wenzhi and the fight for Xingyin’s heart finally comes to a head in a way that I didn’t anticipate. I think I might have gasped very loudly as that finally unfolds and at the same time it was so satisfying and it had the perfect level of drama to make you think it’s come down to the worst only to be uplifted at the end.

Another component I loved is the level of hopefulness I got from this entire story. While there were some moments where the story feels like The level of endurance and strength Xingyin is able to muster facing whatever it is she comes across is admirable. It’s definitely the kind of heroic female protagonist that you want to see!

While for the most part I absolutely loved this book, there was a lot of repetitive language especially coming from Xingyin. I understand wanting to emphasize the devastating moments that contributed to the person Xingyin becomes by the end, but I think saying it more than twice makes it a bit repetitive and forced. They were said so many times to the point where it got annoying. “Ok, we get it. Let’s move on.” But as issues with the books go, that’s the only one and something that I could have easily ignored.

Overall, this entire duology has just been a whirlwind of adventure and romance and surprises around every corner. I’ll be over here reading more books in this style as well as starting another C-drama to keep me entertained in the meantime.