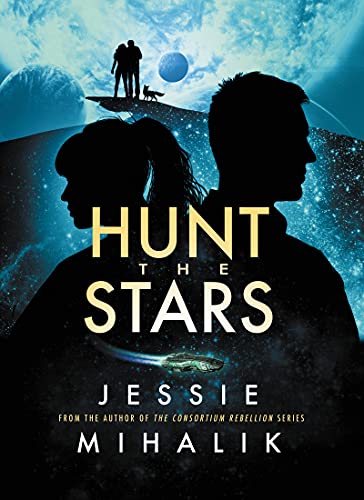 This was such a great start to a new series from Jessie Mihalik and definitely achieves what I believe is the perfect romance for me!

Here’s more about Hunt the Stars

Octavia Zarola would do anything to keep her tiny, close-knit bounty hunting crew together—even if it means accepting a job from Torran Fletcher, a ruthless former general and her sworn enemy. When Torran offers her enough credits to not only keep her crew afloat but also hire someone to fix her ship, Tavi knows that she can’t refuse—no matter how much she’d like to.

With so much money on the line, Torran and his crew insist on joining the hunt. Tavi reluctantly agrees because while the handsome, stoic leader pushes all of her buttons—for both anger and desire—she’s endured worse, and the massive bonus payment he’s promised for a completed job is reason enough to shut up and deal.

But when they uncover a deeper plot that threatens the delicate peace between humans and Valoffs, Tavi suspects that Torran has been using her as the impetus for a new war. With the fate of her crew balanced on a knife’s edge, Tavi must decide where her loyalties lie—with the quiet Valoff who’s been lying to her, or with the human leaders who left her squad to die on the battlefield. And this time, she’s put her heart on the line.

I’m not a huge fan of romantic stories that focuses soley on the couple. I know I’m in the minority here, but when I heard that this is a romance with a bit of science fiction, I had to check it out. I’m so glad I did. Not only does this book feature romance, but it has a big political plot, a cast of quirky characters, an enemies-to-lovers trope, and so much more. I mean, this is everything I’ve ever wanted in a romance story.

But I will say that the science fiction comes first and the romance comes second, which is all super fine with me. It starts off with Tavia and her crew aboard her ship and receiving the details of a bounty mission; to find a missing ring lost by Torran, a Valovian general. Now, the background between humans and Valovians goes back a long time where both these races fought each other for land and power. To have a Valovian ask a human crew to find a missing item is a huge risk and Tavia is will to take it for the huge cashout at the end.

Of course, the crew alongside Torran’s gets into their own rows as they travel back to Valovia in search of the missing item. This is where it gets really good because the twists and surprises are endless. It totally caught me off guard in a good way and I found myself racing towards the end to see what happened.

I would also consider this book science fiction lite because it doesn’t delve too deeply into worldbuilding. That’s okay with me because despite the lack of worldbuilding, there was enough intrigue and suspense to keep me going. If anything, this would be a great starter for anyone who wants to get into science fiction, but feel intimidated by the big worlds.

The romance itself was really well done as well. I loved seeing our protagonists go from enemies-to-lovers and while there are only closed door scenes, I will say that this telepathic caresses were something I wish existed in real life lol.

The only thing I wasn’t a huge fan of was the pace. It felt a bit slow in the beginning as you’re building towards the ultimate ending, but I also loved getting to see these two crews from completely different worlds get to know each other and become friends.

Overall, a great start to a new science fiction series and I can’t wait to read the next!

This is definitely my kind of romance story. I love it when there’s a little bit more going on than just the couple getting together and this one combines it with one of my favorite genres: science fiction.

I will note that the worldbuilding isn’t that strong, but I don’t really care. It comes secondary to the plot and conflict that the author built and I’m all here for it.