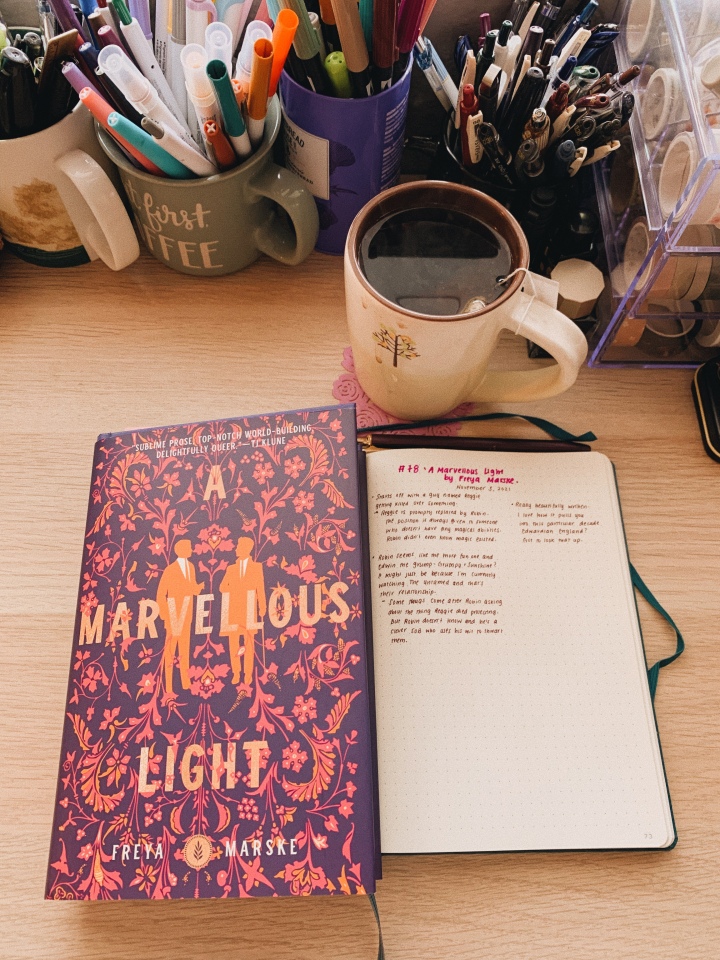 I love a genre-bending story that expertly mixes historical fiction, classic writing, a mystery, and infuses it in a magic-filled world. It also doesn’t hurt if the romance is steamy AF. Thanks to Tor Books for a gifted copy of the book.

Here’s more about A Marvellous Light

Robin Blyth has more than enough bother in his life. He’s struggling to be a good older brother, a responsible employer, and the harried baronet of a seat gutted by his late parents’ excesses. When an administrative mistake sees him named the civil service liaison to a hidden magical society, he discovers what’s been operating beneath the unextraordinary reality he’s always known.

Now Robin must contend with the beauty and danger of magic, an excruciating deadly curse, and the alarming visions of the future that come with it—not to mention Edwin Courcey, his cold and prickly counterpart in the magical bureaucracy, who clearly wishes Robin were anyone and anywhere else.

Robin’s predecessor has disappeared, and the mystery of what happened to him reveals unsettling truths about the very oldest stories they’ve been told about the land they live on and what binds it. Thrown together and facing unexpected dangers, Robin and Edwin discover a plot that threatens every magician in the British Isles—and a secret that more than one person has already died to keep.

I was honestly surprised by this one! A friend of mine suggested it to me and I was a little skeptic because I’m not a huge fan of historical fiction. But the Edwardian era lended itself beautifully to this story and while I came away from the book feeling it was more a romance than it was a fantasy, it definitely kept me entertained.

The story follows Edwin and Robin. Edwin comes from a magical family, but he was born with the least amount of power. Robin comes from a non-magical family and through some clerical error in the system, he goes to work for the magical corporation that Edwin works for. They meet at work, which is just too cute and the trope we all want to happen for us.

But things get dicey when Robin meets some thugs on the street looking for a magical item the last person who had his job had possession of. Without any knowledge of the item, they cursed him with a tattoo that causes pain and gives him powers of premonition. In a fury to find this magical item, Robin searches his office and when Edwin finds him there, he decides to help.

Grumpy and sunshine is probably one of my favorite tropes. Perhaps it’s a callback to my love for Elizabeth Bennett and Mr. Darcy, but I was definitely getting those vibes from Robin and Edwin. When Edwin invites Robin to his family’s estate to look further into this magical item and what’s happening with his curse, that’s when things really start to get going.

I loved getting to know Edwin’s family and the world that he comes from. It reminded me a lot of the Darcy family with its opulence and magic. Edwin’s family is huge and there were a lot of characters I had a tough time keeping track of, but there was so much magic and so many secrets between them that it really engages you and it gets going.

This is definitely a slow burning story, but not a slow burning romance. Edwin and Robin definitely get closer as they stay at Edwin’s family’s estate and try to investigate the goings on with the curse. There’s a few open-door scenes and it will definitely leave you wondering if that magical hand thing works on everyone lol.

I wish there was more backstory for Robin. It seems like he comes from an affluent family, but I felt like there was only a small touch on his life throughout the book. You definitely get to know Edwin way better than you do Robin. I just wish it was the same for him.

The fantasy story also felt like it took a backseat while we watched Edwin and Robin flirt with each other and get steamy, but eventually the story does come back to the fantasy and that definitely peaked my interest. I loved the magic, the world-building, and history behind the magical items they were looking for and what was happening to Robin and his curse. I don’t want to give too much away, but if you’re in it for the fantasy parts, you’ll definitely be rewarded.

Overall, I really loved this story and I can’t wait to see what happens in book 2. It’s got romance, history, magic, and suspense and I think the little bit of everthing worked in their own ways. I’m hoping for more of the magic to be revealed in the next one and how Robin and Edwin’s relationship moves to the next level.

3 thoughts on “A Marvellous Light by Freya Marske // Book Review”