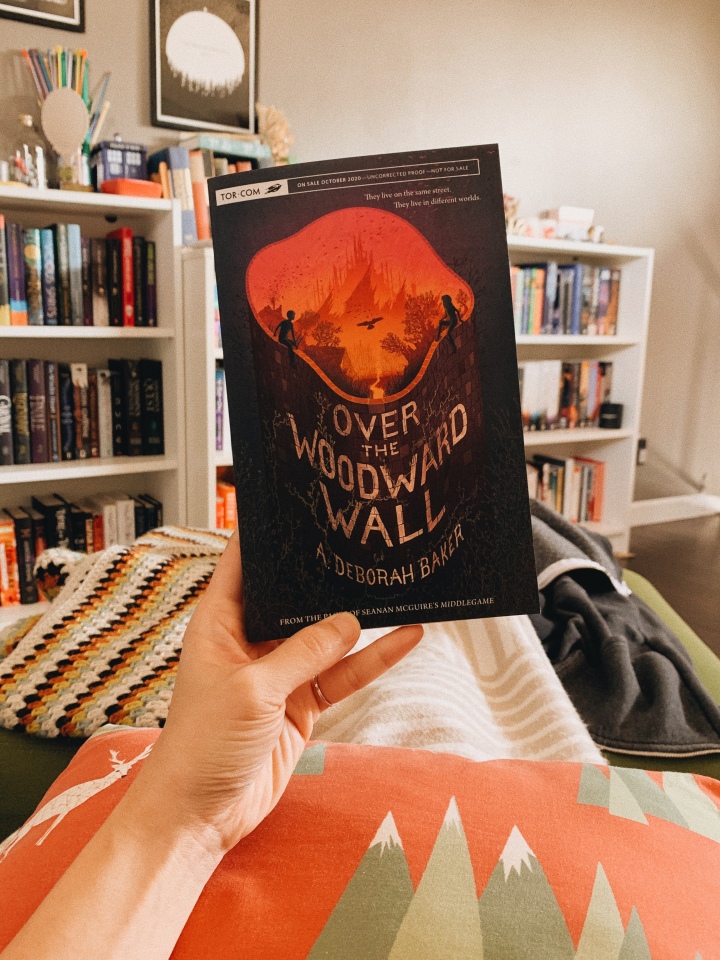 If you’ve read Middlegame, then you probably already know about A Deborah Baker and Over the Woodward Wall. But if you’re not aware, it’s the pen name for Seanan McGuire for a book that’s mentioned within the pages of Middlegame. From the book’s reference, Over the Woodward Wall was a children’s series written by A Deborah Baker to explain the more complex phenomenon between Rodger and Dodger, their abilities, and what these children may look like and act. However, you don’t need to know any of this to read Over the Woodward Wall. It’s almost a bonus for those who already know the context of the story. Get ready to enter The Up-and-Under. Thanks to Tor dot com for the gifted book.

Here’s more about Over the Woodward Wall

Avery is an exceptional child. Everything he does is precise, from the way he washes his face in the morning, to the way he completes his homework – without complaint, without fuss, without prompt.

Zib is also an exceptional child, because all children are, in their own way. But where everything Avery does and is can be measured, nothing Zib does can possibly be predicted, except for the fact that she can always be relied upon to be unpredictable.

They live on the same street.
They live in different worlds.

On an unplanned detour from home to school one morning, Avery and Zib find themselves climbing over a stone wall into the Up and Under – an impossible land filled with mystery, adventure and the strangest creatures.

And they must find themselves and each other if they are to also find their way out and back to their own lives.

I have to admit, I was so excited to read Over the Woodward Wall after finishing Middlegame. I love it when authors get creative with their stories and then write subsequent stories to bolster it. Honestly, it’s always a treat when an author continues to share more stories from a universe they’ve built. And like I mentioned, this book doesn’t require you to have read Middlegame before you’ve read it.

I’m always surprised by how much story can be told in such a short book. In the 200-page novella, Seanan McGuire really captures the world within the Up-and-Under introducing a myriad of characters that I hope to follow throughout the series and providing some interesting story line to help us root for the children and boo at the villains.

It reminded me a lot of Wayward Children series where the kids leap over a mysterious wall in the middle of their neighborhood and enter a world where owls talk to them, girls can be made up of a murder of crows, and the kings and queens have nefarious dealings throughout the lands they rule. It’s got Alice in Wonderland vibes, Wizard of Oz vibes, and all the vibes of any other story where children are transported to another world that’s a bit topsy-turvy.

The narration of the story felt like you were sitting at story time with a bunch of kids. It would probably be a really good audiobook to get into because the way its written really feels like you’re being told a story rather than actually experiencing it. The way it’s written makes you think this is a fairy tale with all the possibilities available to Zib and Avery. They start off so plainly and then as they travel through the Up-and-Under, they learn about themselves, each other, and what really matters to them. They start off as unassuming kids at the beginning, but what they learn while they’re forced to survive in a world without parents or authority is something most of us only learn when we become adults.

I will say that the ending is a little bit abrupt, but it’s also a longer series so I have no doubts that the next one will be better. Overall, this was such a magical journey that I really loved and appreciated. I’ll definitely be getting into book 2 once it’s out.

The best vacation plans are no vacation plans. Happy Thursday!
Who’s your favorite villain?
Journaling the last couple of days in the sun. Like we don’t get enough sun in California, Florida sun just hits differently. Do you take your reading or journaling outside?
A reading spot with a view! What are you reading this Sunday?
Where’s your favorite bookstore?
New views! Do you read on vacation?