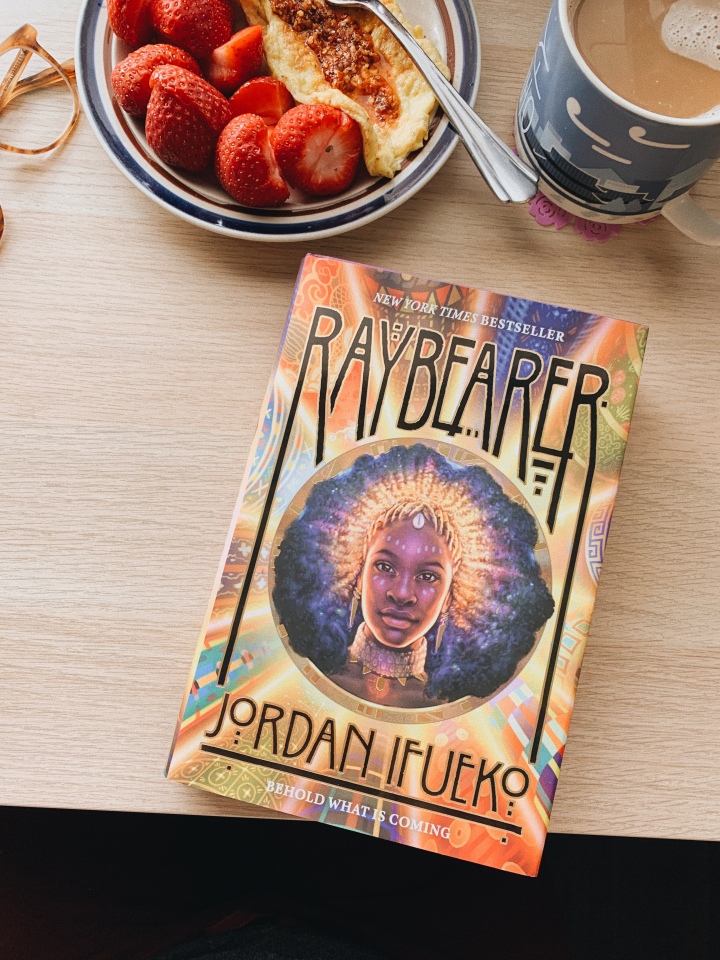 I read this book on the suggestion of my friend at @deedireads. It’s been on my radar for quite some time, but we all know what that reader life is like. But I’m so glad that I actually took the time to read it because it is well worth the read! I’m honestly mad at myself for not reading this sooner. I definitely won’t hold off on reading Redemptor, which is out this week!

Tarisai has always longed for the warmth of a family. She was raised in isolation by a mysterious, often absent mother known only as The Lady. The Lady sends her to the capital of the global empire of Aritsar to compete with other children to be chosen as one of the Crown Prince’s Council of 11.

If she’s picked, she’ll be joined with the other Council members through the Ray, a bond deeper than blood. That closeness is irresistible to Tarisai, who has always wanted to belong somewhere. But The Lady has other ideas, including a magical wish that Tarisai is compelled to obey: Kill the Crown Prince once she gains his trust. Tarisai won’t stand by and become someone’s pawn—but is she strong enough to choose a different path for herself?

Wow, this book right off the bat is incredible. This is a beautiful and complex YA fantasy story filled with intrigue, mystery, political suspense, likeable characters, and so much more. I’m honestly surprised this is a YA book and a debut.

I love a book with great world building and this one delivers so much of it. I felt like Jordan Ifueko put in a lot of effort into this part because if the lore and world-building didn’t make sense, then the story wouldn’t make sense either. It’s always great to read YA fantasy books that have much more depth to it. The lore itself is also incredible. I was telling my husband how the systems of government worked with the 12 ruling parties, the sacrificial children to the Underworld, the political struggle to keep everyone happy, but everyone isn’t. And then on top of that, a massive overtaking of people’s culture and traditions all in the name of unifying the country. There’s so much that this book deals with and does it so expertly that I’m really shook by how this is just a debut!

I also really appreciated that the book had inclusive characters that came from all parts of the world. It made the story feel bigger than just a tiny speck of a world. Everyone’s character carried something important and you’ll want to make sure that every character gets to be happy at the end; even the prince! I honestly was worried that Dayo would be this egotistical little brat, but he turned out to be just a kind and loving human being that I would most definitely follow.

Tarisai was probably my favorite character (alongside her buddies Kirah and Sanjeet). She had that extra something, which was wild when I read the other characters felt like she had a little extra something going on. While she wasn’t the most fearless person, she did approach things in a pragmatic and detailed way rather than just diving right into danger. She has this background in being isolated and alone for most of her life dreaming of the day she would see the rest of the world and that’s just a feeling I deeply understand. Writing the story in her perspective allows you to really understand what kinds of thoughts she has and they are numerous. From trying to figure out the puzzle that is the political structure to finding out the truth behind the throne, it’s incredible to see it through Tarisai’s eyes.

There was no skimping on magic either. Not only was there there a complex magic system, it was so interesting to see how it worked. All the characters had a Hallow (extrasensory power) that helps them in some way. Some characters have the ability to change faces, others to heal, others to find weaknesses in others. On top of that, there’s the magic of the Council of Eleven which keep the Emperor and the Crown Prince from dying of the eleven different ways to die. Then there’s the magic of the Underworld, magical histories being told, and even the history of how all the magic came to be in this world. It truly is so complex and intricate that if you’re the kind of person who loves big puzzles with lots of pieces, this is for you.

The plot itself was so good as well. From studying at the Children’s Palace when they were kids to becoming Dayo’s council and even when Tarisai fights with everything she has to avoid killing the Crown Prince. I loved the journey Tarisai and her friends go on to help each other, the bigger plot of the kingdom trying to unify the country in the worst way possible, and how Tarisai plans on helping the Redemptors from losing more children to the Underworld.

When the truth is finally revealed, it was nothing like I imagined, but all the bits of story finally fit together like an intricate puzzle. You step back and you see how all of this is coming together and it truly is such a beautiful tapestry. Honestly, I 100% urge you to pick up this book if you haven’t. If you’re a fan of YA fantasy novels, then this is definitely a book you’ll enjoy as much as I did.