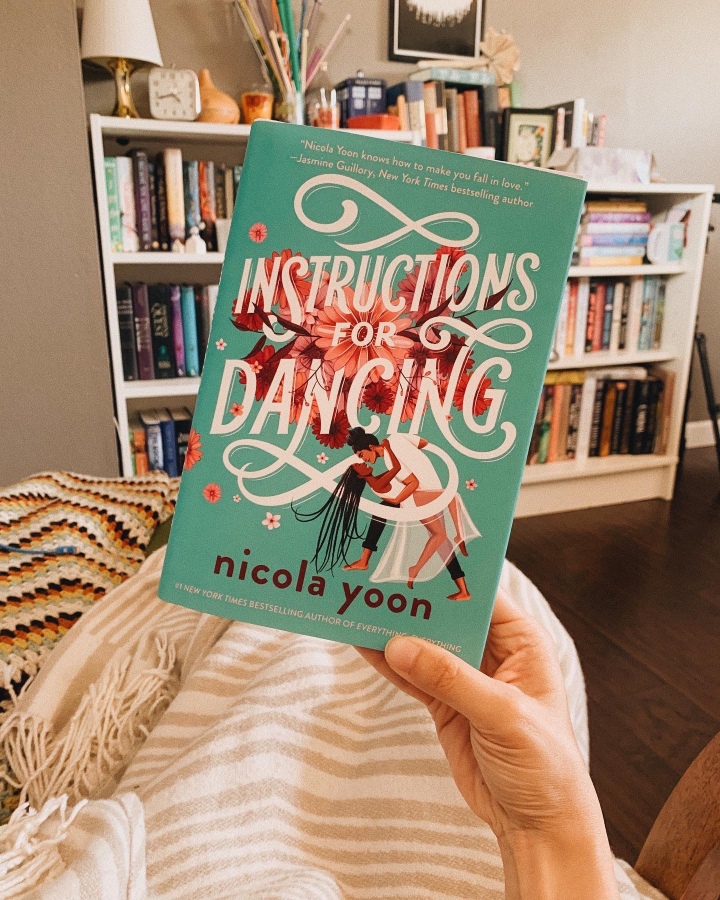 I’m such a huge fan of Nicola Yoon. I’ve read and own every book she’s written because she’s just fantastic in her way of writing diverse romance stories. I knew this was going to be a stunner just like her others, but I didn’t think it would be my favorite from her so far. Let’s get into it.

Here’s more about Instructions for Dancing

Evie Thomas doesn’t believe in love anymore. Especially after the strangest thing occurs one otherwise ordinary afternoon: She witnesses a couple kiss and is overcome with a vision of how their romance began . . . and how it will end. After all, even the greatest love stories end with a broken heart, eventually.

As Evie tries to understand why this is happening, she finds herself at La Brea Dance studio, learning to waltz, fox-trot, and tango with a boy named X. X is everything that Evie is not: adventurous, passionate, daring. His philosophy is to say yes to everything–including entering a ballroom dance competition with a girl he’s only just met.

Falling for X is definitely not what Evie had in mind. If her visions of heartbreak have taught her anything, it’s that no one escapes love unscathed. But as she and X dance around and toward each other, Evie is forced to question all she thought she knew about life and love. In the end, is love worth the risk?

This was an absolute delight and I truly loved reading this one.

Evie was one of my favorite characters by Nicola Yoon. I loved that she has this clairvoyant gift for a while that lets her see the outcome of any relationship. It was a funny coincidence especially when Evie was so convinced love didn’t exist. I even worried about some of the relationships she saw into because I had already fallen in love with the other characters in the story. Evie was complex, going through some difficult feelings, and dealing with it on her own. Her mother wouldn’t talk about it. Her sister refused to recognize it. It’s so hard to be that person with no outlets to discuss your emotions in seeing something serious like your own father cheating on your mother.

I’m not surprised by her reaction. In fact, I would feel the exact same way and what I thought was interesting is that this book tackles a big lesson we all eventually learn; that our parents aren’t superheroes. It’s a rough lesson, for sure, and Evie handled it to the best of her ability.

Evie and X’s relationship was also adorable. I loved that X is new to LA and Evie shows him around to all her favorite spots (except the celebrity tours). It felt natural to me and when Evie says that X fell into her group as if he was always there, I totally believed it. I also loved how they motivated each other. Evie was hesitant to go to her father’s wedding. X didn’t want to finish high school. And they both encouraged each other to do things that they already marked in their heads they didn’t want to do. That’s the kind of relationships I love seeing; more than the romance it’s about encouraging each other to climb a pretty steep hill and being open to accept that encouragement.

I will say the ending was surprising. I knew with Evie’s powers there would be some heartbreak in her future, but the heartbreak was even more unbearable than I imagined. Ooph.

Overall, this was such a slump buster. I’m so glad I picked it up when I did and the book will have you laughing and crying at the same time.

Thanks Get Underlined for a gifted copy of the book. My opinions have not been influenced by the publisher or the author.

The best vacations are cozy vacations. What is your favorite vacation activity?
Stepping into a new sci-fi read with a big cup of tea and a cozy chair. What are you reading this weekend?
The best vacation plans are no vacation plans. Happy Thursday!
Who’s your favorite villain?
Journaling the last couple of days in the sun. Like we don’t get enough sun in California, Florida sun just hits differently. Do you take your reading or journaling outside?
A reading spot with a view! What are you reading this Sunday?