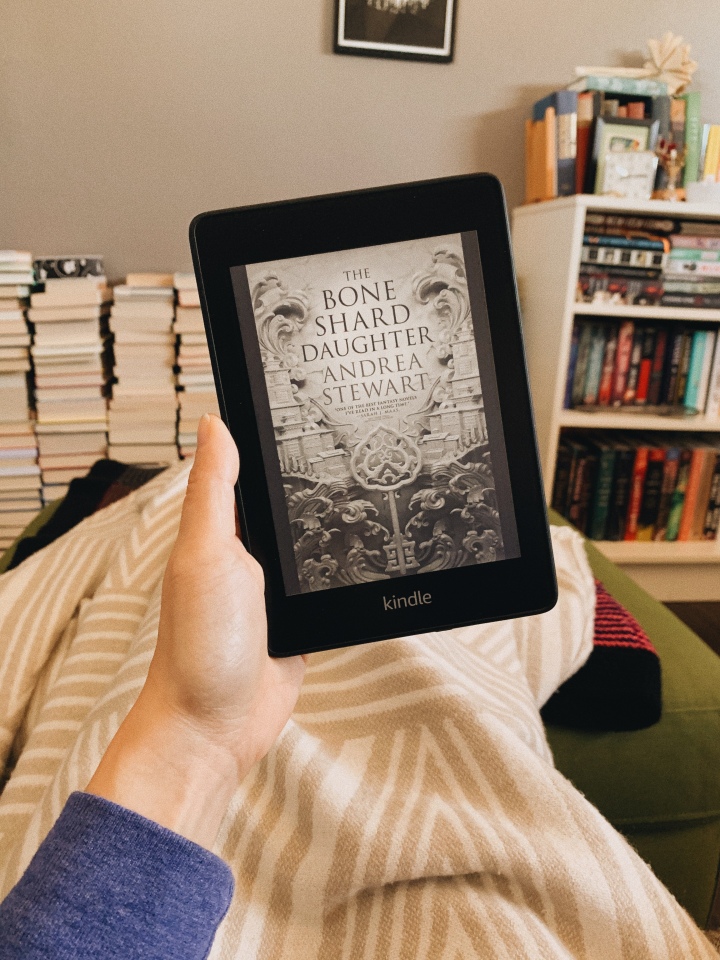 I’ve already had such a deep relationship with this book because I spent so much time with it. It took me nearly two weeks to read and part of that was my mental health, but the other part was because the story was deeply rich, complex, filled with twists and turns that pretty much start at the beginning of the book. I’m so happy to have read it and I can’t wait for the next one.

The emperor’s reign has lasted for decades, his mastery of bone shard magic powering the animal-like constructs that maintain law and order. But now his rule is failing, and revolution is sweeping across the Empire’s many islands.

Lin is the emperor’s daughter and spends her days trapped in a palace of locked doors and dark secrets. When her father refuses to recognise her as heir to the throne, she vows to prove her worth by mastering the forbidden art of bone shard magic.

Yet such power carries a great cost, and when the revolution reaches the gates of the palace, Lin must decide how far she is willing to go to claim her birthright – and save her people.

Despite what the description says, this book is about more than just Lin. This is about a couple of people who’s affected by the decisions the empire has made for its people. To start off, the bone shards. Basically, they’re collected from every single young person in the nation by jabbing a hammer into a kid’s head. Sometimes they make mistakes and a lot of kids die from this treatment, but the shards themselves are used to power these Frankenstein monster style creatures called constructs. By placing these bone shards into the constructs with a certain set of instructions, you’re able to power up your monster and make it do the things you want them to do. You may think this is fine since all it is a piece of bone they collect from you, but one of the side effects of using the bone shard is that you also feel the symptoms of when the shard is in use. They age over time and use and if used too often, the owner of the shard will feel it. Many people died.

That’s where the major conflict comes from and the main motivation of most of the characters in the story. But let’s talk about the actual book and what happens within its pages. First off, Andrea Stewart drops you right into the story and doesn’t give you any help. I found myself a bit confused at the beginning wondering why I’m supposed to care about these characters. I knew they had some sort of story behind their actions and the fact that they’re given their own POV, but aside from that it was hard to discern what all of this was about. However, as I kept reading and it took me nearly half the book to finally get it.

And when you get it, you get it. You just have to be patient. The story unfolds itself and the details provided help bring you to the conclusions, but it’s definitely subtle. You need to be paying attention and it was one of the reasons why I took my time reading this one. I didn’t want to miss some important detail that would come back later on. But I can understand someone’s frustration with the story especially when there’s so many questions that need answering. There is a lot that happens in this book. Not only are there big components, but smaller bits and pieces to the story that are introduced but not really explored. I’m assuming those bits and pieces will be looked into in the rest of the series.

It’s written in four different POV. The main ones you’ll follow throughout the story are Lin and Jovis. You’re also introduced to Ranamai and Phalue as well as Sand. I liked these characters as well, but they didn’t get much page time as Lin and Jovis did. In fact, it’s one of my issues with the story. I understand why Sand’s part is so important and that only happened at the end of the book when more important information is revealed. But as much as I liked Ranami and Phalue, I was a little confused about their point in the book. I liked their relationship, the struggle to fight for what’s right but also falling in love with your enemy feel, but I wasn’t sure how it played out into the bigger part of the book. There’s even a section of the story where Jovis comes and helps Ranami and Phalue with their rebellion, but aside from that it made me pause why they had their own perspective.

I felt the same way about Sand. You’re introduced to her POV, but you wonder why. For most of the book, you’ll be asking yourself why this is important until the very end when things finally get revealed. I won’t share too much because there’s a lot of spoilers in this book and I don’t want to ruin it for anyone who’s interested in reading it.

But I will say that a lot of the answers are at the end of the book. Big reveals come tumbling in one after another that will shock you as you invest more and more of yourself into the story. I really loved following along with Lin and Jovis. As Lin continues to find more answers for yourself, you see how twisted the world around her truly is. You end up rooting for her, hoping she’s able to find herself in a world that only sees her in a specific way. I also felt a lot for Jovis. He was a smuggler but on the search for his missing wife and along the way he helped save young kids from having their bone shards removed. I admired Jovis despite him trying to be the bad ass that smuggled goods and morally grey. It was like Han Solo who tries to pretend he’s a bad ass, but he’s still a softie.

I also really loved this theme of identity. Jovis is biracial within the book and he brings up some of the concerns he’s had with his identity because of it. Lin also has some questionable upbringing and because she doesn’t remember a lot of her past, there’s a lot of herself forging her own identity despite who she was before she woke up. I felt like each of the characters faced some sort of moral dilemma aside from the whole “let’s save the empire” stuff. It made for an interesting read and I loved that Andrea Stewart approached it in this way.

The biggest issue I have with this book is all the questions you’re left with when you’re done. I know it’s probably not Andrea Stewart’s intention to leave us all on baited breath, but I felt like there were some themes introduced to the story and they weren’t covered. As a reader, you want everything wrapped up all tidy. I get that Andrea Stewart probably kept things hidden for the subsequent books, but I wanted those answers now. Even though the end of the book left everything pretty tied up, there were still some threads hanging and I wish I had book two already so I can continue reading.

Overall, this is a great start to a brand new trilogy. It’s a compulsive read that will leave you wanting more and I’m excited to see what happens next.

What’s your favorite sci-fi and fantasy story? Thanks @getunderlined for the gifted book.
Happy Mid-Autumn or Chuseok or Moon festival! Thanks @harpervoyagerus for the gifted book. #DaughterOfTheMoonGoddess
What’s one thing you’re looking forward to this week?
Happy weekend everyone! Who’s glad it’s finally here? I know I am lol.
What’s your favorite season?
Scenes from an unfinished breakfast. How was your morning?