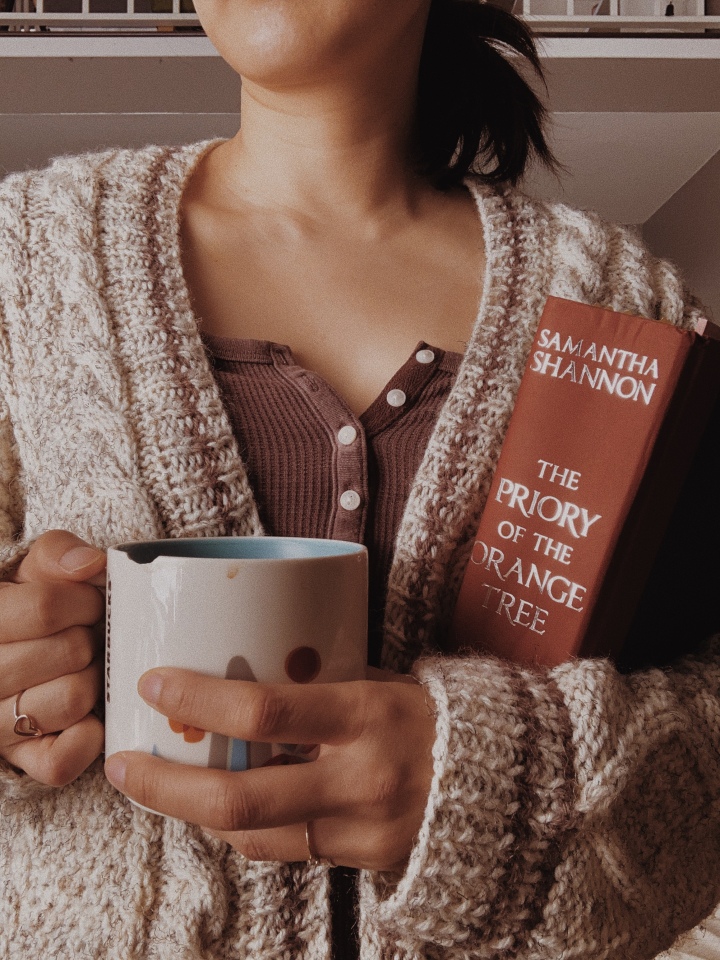 Happy Friday! I hope that everyone’s reading of The Priory of the Orange Tree is going well! I just got into it on Wednesday, finished the first 200 pages, and already working on the rest of the book. So far, it’s been dizzying with the amount of info and events going on. I’m enjoying the pacing. I like that it’s taking its time to reveal itself, that it’s richly developing, and I’m seeing a small amount of all these threads and how they interact with each other. I will try to avoid spoilers here, but so much has happened!

This is most definitely going to be one of those spider-web stories where threads of individuals will all come together at some point. At this point, it’s finding out who the characters are and their significance to the story as well as keeping tabs on all the happenings to avoid missing something. I have already missed stuff and if I’m being fully honest, I want to go back and reread the first 200 pages again. I want to really immerse myself in this story and for myself, it feels like one of those stories I have to read carefully otherwise I’ll end up lost.

But it also feels like the first 100 pages is a lot of setup and not enough getting to know the characters. I feel like there’s a TON of characters (enough for there to be a glossary of them in the back of the book. I highly suggest you check that out if you need help remembering everyone), but you know bits and pieces of them. It makes sense since all will be revealed, but it also feels uncertain. Who are the characters that we will be following throughout the story? What are the important components of the story?

After the first 100 pages, it felt like it started to mellow out and draw its lines on who the main characters are, what the main issues are, and how they all interconnect in this world. The world itself is brilliant. I can already see a lot of Western and Eastern influences in the story intermingling together, which is kind of interesting. It reminds me a lot of the Chinese historical dramas I love to watch with flowing silk gowns, lots of fanfare, and a whole ton of trope-y goodness. And there are dragons. FULL STOP. There are so many dragons and they’re the kind of dragons you want them to be. Big, menacing, somewhat scary. I cannot wait to see more about this dragon.

I might take my own advice and start the book again, which will be a pain since I’ve already read so much. But at the same time, I want to understand this book. It’s probably my own head where I didn’t give myself enough room after getting through most of my last book and then starting this. I think I might give myself the time to do it this weekend.

Ok I’m adding an update to this blog post because I re-read the first 200 pages and have quite a lot more thoughts.

The religion. Has anyone else noticed there’s a heavy hand with a religious aspect in this book? The Virtudom having the Six Virtues to believe in and anything outside of that (which is the idea that Galian Berethnet was the person who slayed The Nameless One and founded Inys). I always find it intriguing when an author creates something like a culture or a faith within the story that the characters live under. I have a good feeling that this is going to be a bigger component to the rest of the novel. What do you think?

Speaking to this, I also thought the royal engagement near the end of this section was kind of interesting. I feel like the royal intrigue in this story is extremely complex. You have Sabran who needs to get married and have a kid in order to protect Inys from The Nameless One. But she doesn’t seem like she wants to get married (completely understandable). I think the appearance of Fyredel really set in the importance of doing her duty, but with Sulyard and Truyde both saying that it isn’t Sabran’s line sealing The Nameless One I have a feeling that there’s going to be some real truths being revealed. This is probably the part of the story that’s intriguing the most at this point. What about you?

I’m also super intrigued by Niclays. Out of all the characters, it feels like his involvement is a bit more separate. He’s not Ead and closely next to Sabran. I can imagine that his involvement with Sulyard and Tane will eventually come back in the future, but I wonder what he did to be exiled and if he plans on finally creating the elixir of life? We shall see.

Finally, I just wanted to say that this book reads like a Chinese historical drama. Maybe it’s because I’ve been watching them a lot lately, but the royal intrigue and a bloodline protecting citizens from a great evil feels very much like the drama I just finished watching. I mentioned this earlier, but I’m seeing a lot of East Asian influence in the story as well as some European influence. I keep wondering if Samantha Shannon is into Chinese dramas as well.

I’m currently in love with Ead. I find her story to be the most intriguing in the story so far. But I also like Tane. She seems to have some mysterious past too and I want to crack into that and dig a bit further. I think all the characters that have been introduced are so intriguing and I want to get to know them all way more.

This was the scene that really blew me away! I won’t get into it, but I want to hear what your thoughts were. When I read this scene, I knew this was going to be the book for me.

I have some, but I’m not going to tell. It’s way too early to figure out if these theories are accurate! I also make wild theories, so I need to hold myself back.

I’m intrigued by Sabran and the entire “you must have a baby soon to keep this kingdom alive.” Oooh yes. I must find out more on this. I’m also loving the backstory. All the clues leading up to the current state of the world always intrigue me and keep me reading. I must know all!

Any other comments? Leave them below! Talk to you all next Friday as we read up to the halfway mark!

10 thoughts on “The Priory of the Orange Tree // First Discussion”