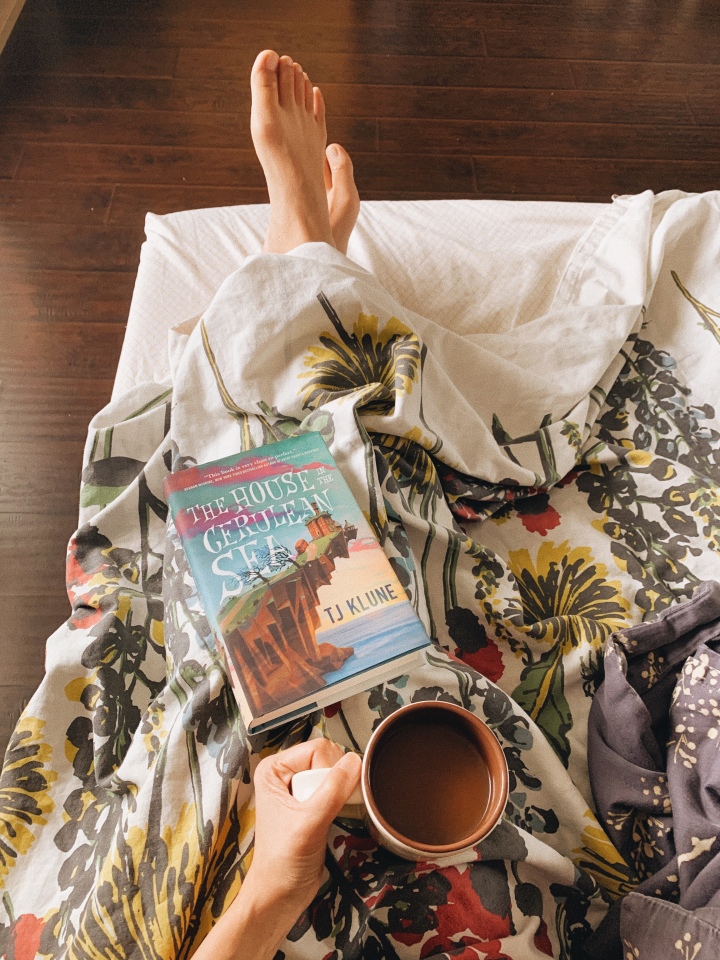 Over the last couple of months, I’ve tried to read The House in the Cerulean Sea three times. I tried twice with an audiobook and then once with the ebook I got from the library. Well, my brain wasn’t really paying attention during the audiobook and my ebook was a loan from the library, so that went back before I even finished the book. But as they say, fourth time’s the charm! Let’s dive in.

Here’s More About The House in the Cerulean Sea

A magical island. A dangerous task. A burning secret.

Linus Baker leads a quiet, solitary life. At forty, he lives in a tiny house with a devious cat and his old records. As a Case Worker at the Department in Charge Of Magical Youth, he spends his days overseeing the well-being of children in government-sanctioned orphanages.

When Linus is unexpectedly summoned by Extremely Upper Management he’s given a curious and highly classified assignment: travel to Marsyas Island Orphanage, where six dangerous children reside: a gnome, a sprite, a wyvern, an unidentifiable green blob, a were-Pomeranian, and the Antichrist. Linus must set aside his fears and determine whether or not they’re likely to bring about the end of days.

But the children aren’t the only secret the island keeps. Their caretaker is the charming and enigmatic Arthur Parnassus, who will do anything to keep his wards safe. As Arthur and Linus grow closer, long-held secrets are exposed, and Linus must make a choice: destroy a home or watch the world burn.

An enchanting story, masterfully told, The House in the Cerulean Sea is about the profound experience of discovering an unlikely family in an unexpected place—and realizing that family is yours.

This book was a massive bear hug from a close friend who just wanted to share some love. If I could describe love, it would be this book. Because it’s about love, about acceptance, about changing your perspective, and about being wholeheartedly yourself. Double props go to this book for also making me cry. Seriously, I cried. And I wish I can say it was just a solemn tear after a beautiful read, but it wasn’t. It was ugly and my heart melted into a candy puddle.

I love that we follow this book through Linus’s perspective. He starts off as this pretty boring social worker who goes to various orphanages that house magical children with extraordinary powers. He’s very by-the-book and the kind of guy you think would blow the whistle at the slightest rule-breaking. This goes double for Lucy aka Lucifer, who is the son of the devil. But then you see him figuratively and literally “loosen his tie” and open up during his time on the island. His observations on Arthur and how the little orphanage takes care of themselves. I loved watching him grow and open up; it was such a beautiful sight especially as the last person you would think to open up like that.

I think my favorite part of the novel was watching Linus go from lowly office worker who has nothing to look forward to become someone who cares more deeply about the children he was forced to observe and report. I loved that he looked back at his work at the end and realized that his apathy left these children without a home or people to care for them.

The children were also stars of this book. Chauncey was a mysterious green blob of a human, but he dreams of being a bellhop in the future. Lucy is the anti-Christ, but he’s just a young boy who loves to play and suffers through some terrible nightmares. Talia is a bearded gnome who loves her garden and growing flowers. Sal is a bigger kid who’s very shy and when he’s scared, he turns into a tiny white fluffy dog. Honestly, this cast of kids reminded me a lot of anime (I know, here we go again with the anime comparisons), but having a cast of characters all with their own special powers that only define a small fraction of who they are is one of my favorite parts of this book.

And Arthur. OMG, ARTHUR. In my head, I imagined him as Tom Hiddleston with his cool collected calm, but the fierceness inside him to protect the children from anyone. I loved that Arthur and Linus complemented each other. One was serious and the other a little bit more relaxed, but both fiercely loving these children like their own. I most definitely ship them.

Of course, there’s animosity. I mean, these are kids who have magical powers and not all of them look like your average kid. So there are people who will treat them differently, treat them as a threat and an enemy just because of the way they look. There’s even the bigger DICOMY government-run orphanage that see these kids more as a burden to society they have to work with than what they really are; they’re just kids.

There’s heaps of growth from everyone all around. The kids grow to love another adult who journeys to the island; an adult who has a position to close their orphanage and kick these children out. Even some of the stories from the kids describes their poor journeys through several orphanages only to be kicked out.

I can see what other people’s gripes are about the book. The main character is difficult to like. The story doesn’t further explain the magical children and why they are the way they are. There isn’t some wild plot to follow either. However, I don’t find fault in these things. Approaching this book is similar to approaching general fiction or literary fiction. Not all science fiction or fantasy novels need to be action packed. Some novels are more about the connection between humans or the bigger and more complex themes of our existence and you have to give this book credit for discussing the biggest theme; that humans are most definitely capable of change.