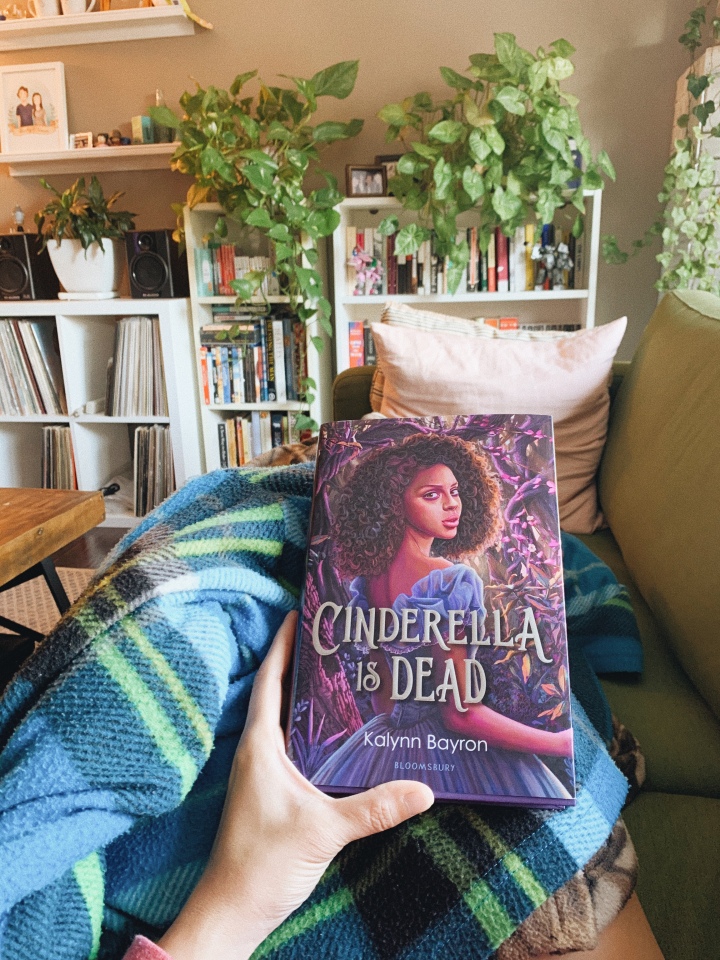 When I first heard about Cinderella is Dead, I thought this would be another Cinderella retelling with a person of color at the forefront of the story. However, what we got was something way different and I truly appreciate Kalynn Bayron’s creativity in weaving this story.

Here’s more about the book (from Goodreads)

It’s 200 years after Cinderella found her prince, but the fairy tale is over. Teen girls are now required to appear at the Annual Ball, where the men of the kingdom select wives based on a girl’s display of finery. If a suitable match is not found, the girls not chosen are never heard from again.

Sixteen-year-old Sophia would much rather marry Erin, her childhood best friend, than parade in front of suitors. At the ball, Sophia makes the desperate decision to flee, and finds herself hiding in Cinderella’s mausoleum. There, she meets Constance, the last known descendant of Cinderella and her step sisters. Together they vow to bring down the king once and for all–and in the process, they learn that there’s more to Cinderella’s story than they ever knew . . .

This fresh take on a classic story will make readers question the tales they’ve been told, and root for girls to break down the constructs of the world around them.

I really loved that this wasn’t a retelling of Cinderella, but a post-Cinderella world where the tale has been made into laws. It’s extremely patriarchal bordering on Handmaid’s Tale level of government. I also loved how Bayron turns Cinderella’s story into something completely different. It went from being a fairy tale to a full-blown fantasy novel. While there wasn’t a lot of world building, I assumed we’re suppose to use what we already know about Cinderella’s story to color the gaps in this world. However, I would have loved to see more world building here. Not a big deal, but something to note.

But the surprises were very eye opening. I think many of the twists and turns in this book kept me reading. I wanted to know how it all ends and Bayron definitely provides it for you. I wish I can provide those, but I won’t. They would spoil this book and the creativity Bayron put into changing Cinderella’s story.

I also loved the message. This story definitely has that defiant feeling of the young voices of 2020. It felt seriously relevant to what’s happening right now. Sophia’s determination to end this for herself and others hopefully will stoke the flames of progress and change in our reality.

However, there were a few things I wasn’t a fan of. First, this book moved quickly. Much of the ending was wrapped up in a few sentences than showing the battles of naysayers who don’t want things to change vs people working to overrule the current laws. I would have loved to see that.

Everything was also easy and convenient for Sophia. She had the tools she needed at times when it was difficult. She just stumbled across different rooms within the castle when she finally was inside. She somehow uncovered something without having to look too hard. It was too Mary Sue and I’m just not a fan of that trope. I want there to be some difficulty. I want there to be some reflection and deep thinking into what she’s about to accomplish. I wanted her to fail a few times just so that she can get up and keep trying.

The last thing I wanted to mention was Sophia’s love story. I feel like Sophia’s love story with her friend was put on the back burner. I thought there would be a more Sapphic romance in this book, but it felt a little neglected.

Overall, I thought this was an entertaining read with a deep message for us to take away. I loved the spin on Cinderella as I love any re-imaginings of fairy tales and folklore. Despite its issues, I really enjoyed it and truly just wanted more from this story than what was provided.

I received a copy of this book from Bloomsbury YA for free in exchange for an honest review. My opinions have not been influenced by the publisher or the author.

One thought on “Cinderella is Dead by Kalynn Bayron // Book Review”