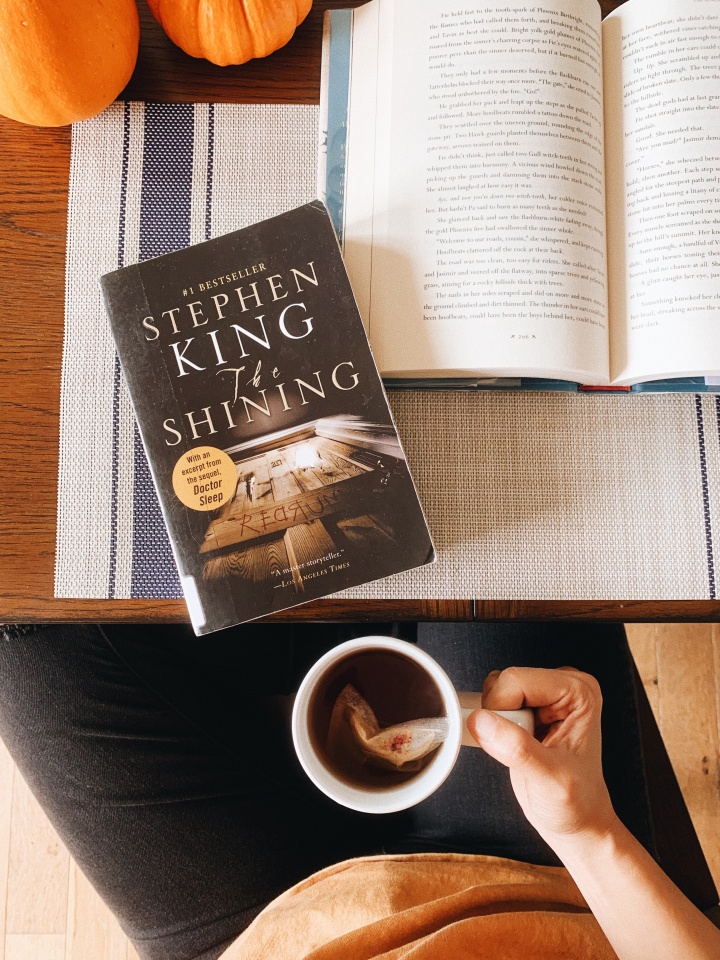 One of my all-time favorite things to do is read a book and compare it to its movie adaptation. Lately, it feels like many books being published are also being picked up for movies or tv series. I could rattle off a list of all the great books made into television or movie adaptations that came out this year.

With that in mind, I wanted to bring a new series to the blog where I compare and contrast the movie to its book. This series will discuss both the book and its subsequent movie or tv show. I won’t be bashing one or the other and I won’t be yelling “the book was better” from the rooftops. It will be spoiler-heavy, so keep that in mind when reading these essays. I just always find it fun to see how Hollywood breaks down a book and what makes it to the big screen.

We all know that the book is always better than the movie, but there are some movies that have been adapted that stand on their own. The first book and movie we’ll be discussing is The Shining by Stephen King.

I read The Shining for the first time this fall. I wanted to finally dive into Stephen King’s horror work and with Doctor Sleep coming out in theaters, I wanted to read this quintessential Stephen King and then watch its movie. Luckily, I had the opportunity to watch the movie on a flight I recently took and couldn’t believe what Stanley Kubrick kept and left out. There were some positive moments for me, but a lot of disappointing ones as well.

Here’s the synopsis of the book

Jack Torrance’s new job at the Overlook Hotel is the perfect chance for a fresh start. As the off-season caretaker at the atmospheric old hotel, he’ll have plenty of time to spend reconnecting with his family and working on his writing. But as the harsh winter weather sets in, the idyllic location feels ever more remote…and more sinister. And the only one to notice the strange and terrible forces gathering around the Overlook is Danny Torrance, a uniquely gifted five-year-old.

Here’s the trailer for The Shining

I think The Shining movie gets a lot of flack around how little it actually adapts from the book. When watching the movie, it definitely felt more like Stanley Kubrick took the horror components of the book and extenuated them.

However, I don’t discount Stanley Kubrick and his way to build atmosphere. The movie builds suspense through high pitch noises and sudden cuts displaying horrific scenes. Despite it not being an exact adaptation of the book, the movie itself was pretty gruesome and scary at points. It definitely filled the quota of suspenseful thriller and if you watch the movie without reading the book, then you’ll see this as one of Stanley Kubrick’s masterpieces with his camera usage and editing skills.

I feel like if you don’t read the book before you watch the movie you’re going to be super lost. I think the one thing Stanley Kubrick left out that was vital to the story was that the Overlook Hotel feeds off shining energy. It wasn’t clear that Danny was the target here for his exceptional shining powers and I feel like if that was established more, then you would understand why the hotel went after Jack’s mind.

I can just imagine the folks watching this movie when it came out and being completely enamored by Stanley Kubrick’s work. The wall of blood, the completely naked woman, the appearance of ghosts and the edited cut scenes were all probably new and innovative back in the day. The lack of motive probably also lent to the scariness of this movie because watching Jack go from average human to completely mental is very apparent. I just wish it was explained.

But I did appreciate that Kubrick kept essential characters like Dick Halloran (who explains the shining to Danny) and Tony, Danny’s spirit friend. I was worried Dick would play a super small role, but I think Stanley Kubrick understood his importance. Not only in explaining the shining, but also being the person who eventually saves Wendy and Danny from Jack.

I wasn’t a fan of how Danny described Tony as a kid that lives in his mouth and accesses Danny’s finger and voice when he speaks. The book describes him as a voice Danny hears and Danny relays what he says to his parents. I think that I liked the book’s concept of this better because it made it more obvious that Tony is broadcasting directly into Danny’s brain. However, I can see how that can be difficult to display on screen especially when Danny is having conversations with Tony.

I loved how Wendy is portrayed in the movie as well. At first, she seems like a sheepish housewife, but when it came to protecting her son, she changed completely using weapons against her own husband. It was also really clear that Wendy struggled with loving her husband and protecting her son. Although, I felt Wendy was a much stronger character in the book, I really appreciated how strong she was on screen.

I also liked how Stanley Kubrick used a hedge maze instead of animal topiaries. To be honest, I think this was because they didn’t have the technology back then to make CGI topiaries come to life. The maze is also more menacing and the chase scene really built suspense.

What did you think? Did you like the movie or the book better?

8 thoughts on “Books and their Movies: The Shining by Stephen King”

Happy Tuesday! What would you do if you found out you were royalty? I’m reading Tokyo Ever After by Emiko Jean for #StanAsianAuthors. Thanks @flatiron_books for the gifted book.
Happy Monday! Do you believe in aliens or extra-terrestrial life?
Happy Sunday! What’s on the agenda for today? Bucky and I drove out to San Clemente for some surfing, but you know I’m on the beach reading Project Hail Mary by Andy Weir.
What’s your sign? Sharing with you all a fun book I recently received! This is such a cool gift and something you can get for the astrology lovers in your life. Thanks @birthdatecandles for the gifted book.
New day new reads! What’s the last funny book you read? Today I’m starting Project Hail Mary by Andy Weir. Thanks @randomhouse for the gifted copy. #ProjectHailMary #PHMLaunchCrew
Who’s a new-to-you author you’re excited to read? For #StanAsianAuthors, I’m sharing Amelie Wen Zhao’s epic fantasy series; Blood Heir!