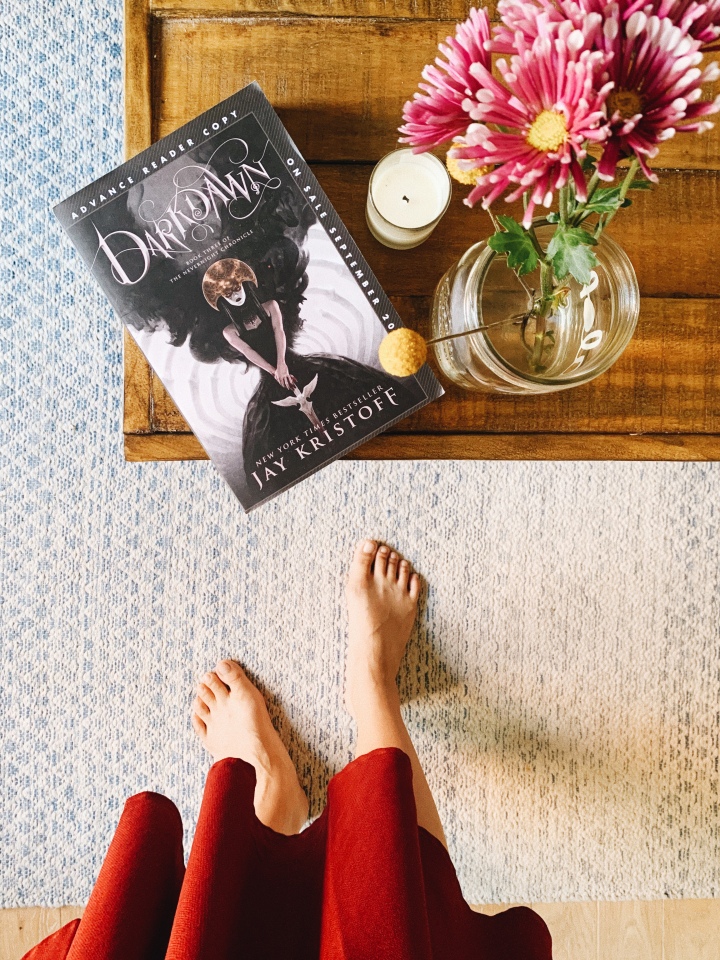 Jay Kristoff is one of those authors I’d been curious about for a long time. My tsundoku ways collected all the books in his repertoire, but afforded me none of the time to read it. So I read Nevernight and Godsgrave a few weeks back to prepare for Darkdawn. I decided to buddy read the final book with Jenna (@whatsjennareading) and found it to be such a blessing to hear her thoughts on the final book juxtaposed to my own thoughts. I think we helped each other process our feelings on the last book.

Some spoilers in this review, so please read with caution.

TW: lots of blood. So much blood.

Darkdawn takes place immediately after the end of Godsgrave. Mia has just taken her brother and meeting Mercurio and Ash after killing Cardinal Duomo and Senator Scaeva. Right off the bat, the story moves quickly.  You get a lot of info in the first 100 pages that you assume the rest of the book will take off just as quickly.

However, what I thought was a super quick start to the book turns out to be just the start and the next 400 pages were filled with a huge journey across the sea, across the desert, and across most of Itreya. For all intents and purposes, it was a great ride but I felt there was a huge lag in the story. It was almost like Jay Kristoff couldn’t make up his mind on how he wanted the story to end. What I assumed would be a straightforward storyline turned out to be filled with twists and loops I didn’t anticipate. It set me off a little, but when thinking about it in hindsight, my feelings for its pace are completely subjective and in truth, I think Jay Kristoff approached this book with a lot of heart being that it’s the last book in the series.

Also, I wasn’t a fan of how Jay Kristoff approached certain parts of this book. When Mia finally retrieves the Crown of the Moon, it almost felt like an afterthought. I also thought it a little easy for Mia’s antagonist to get his powers so easily. Both of these points I was really hoping for some more story, but I guess I have to just take it as it’s written.

I don’t want to talk too much about the plot of the final book because there’s a lot of surprises and I don’t want to ruin that for anyone who hasn’t read it yet.

But despite its pace, the character growth in this book is tremendous. I loved how much Jonnen grows by the end of the book. I loved how much Mia goes from a heartless wench out to murder the people who killed her family to someone who had something to stand up for. It wasn’t just a sociopath we were dealing with, but a person who dealt with a lot of bad things in her life and towards the end I like to think she saw a glimmer of happiness.

I mean, it was a small glimmer. Let’s not forget who wrote this book.

I also loved the surprises. I think Jay Kristoff seriously has a gift for making you second guess yourself and keeping you on your toes because each truth being revealed was so surprising and different than what I imagined.

But I think my favorite part of this whole series was the lore. Jay Kristoff did an amazing job building this world and I was so invested in finding out what happened to Cleo and the darkins and what Mia’s special powers means to her. I was so excited to see Niah and Aa and Anais and how their stories incorporate to the bigger story with Mia. Seeing how this all unfolds in the final book was beautiful and so exciting. All the little poems and lines just finally click and make sense and when you see how all of it fits together, it’s like a mosaic of magic I wasn’t expecting to fall so in love with.

In the end, I absolutely loved these books. I don’t think they’re the perfect fantasy series; I mean I have my fair share of critiques for all three of the books. But I absolutely loved the plot, the world, and the characters so much that I’ll cherish this series and hype it up to anyone who wants to read something subversive.

And with that, gentlefriends, I say…

And never ever forget.