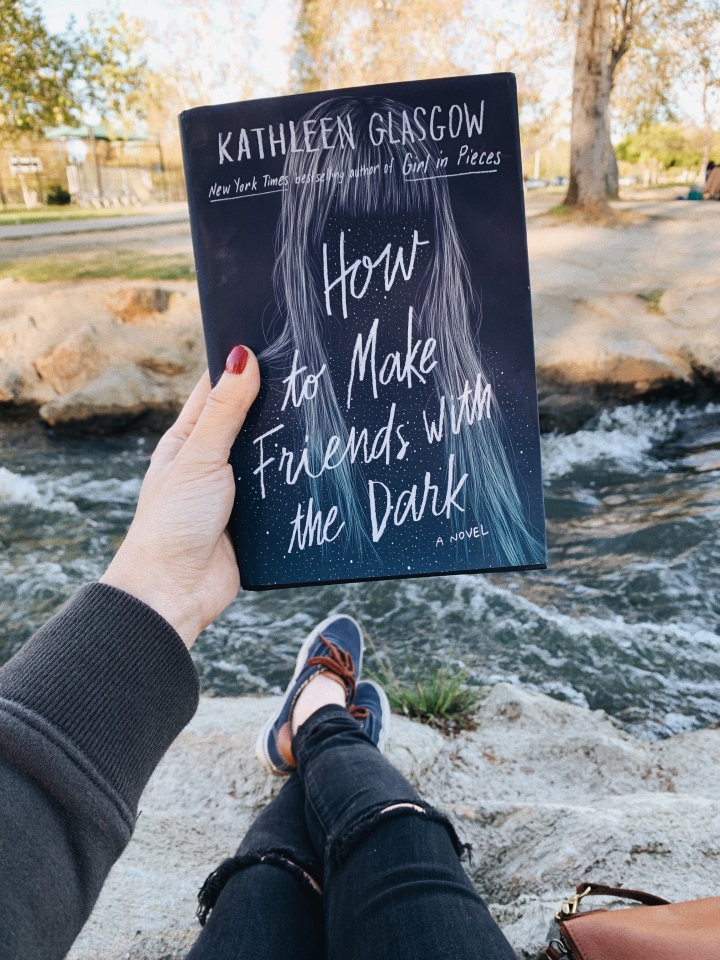 I received a copy of this book to promote on Instagram, but I was interested in the book before the promotion and so I read it right away. This book didn’t disappointment me and made me think about more things than just a young girl who loses her mother.

This story deals with loss and grief as its main theme. There’s also discussion of homelessness, the foster care system, and child/domestic abuse.

How to Make Friends with the Dark was my first novel by Kathleen Glasgow and I have to admit, I’m extremely impressed. The story touches on some interesting topics I never would have thought of. It’s also got a lot of emotions and themes to make you continue reading.

The story follows Tiger (who’s real name is Grace) who for all intents and purposes is your average teenage girl. She’s about to finish sophomore year of high school. She’s been making out with her long-time crush. She’s got a best friend in the entire world. And she has an incredible mother who’s a little eccentric, protective, and loving.

On a random day, Tiger and her mother have a big fight over a date to the dance. Tiger wanted to protect herself by not talking to her mother all day only to see a photo of a hideous gown she bought for her.

Suddenly, Tiger’s mother dies of a brain hemorrhage. Because Tiger only has her mother, she’s taken in by the state and enters the foster care system.

The next part of the book is watching Tiger go from home to home while in the middle of mourning a mother she loved dearly, but barely knew. I really loved this part because it was a realistic depiction of someone’s mourning process. She even dealt with a few of the stereotypical things people say to mourners. She even went over in her head the things she said to her mom before she died.

There was a lot of regret in Tiger’s personality. She hated that she didn’t ask more about her father. She was mad at her mother for not sharing enough about her. Tiger was pushed into a world she knows nothing about without the one person she relies on the most. It’s an incredibly stressful time for anyone in that situation.

I thought the most interesting part of this novel was depictions of the foster care system. I guess I haven’t read many books where kids are shuttled between homes, but this was an interesting overview that I’ve never seen. I honestly feel bad that I didn’t know more, but now I’m more intrigued.

However, the main theme of this novel is loss and grief. Tiger’s story is only one person who dealt with loss in their own way. It was shocking to see her, how she dwindled down to nearly nothing, but I can imagine how much pain she must be feeling. If you’ve ever lost someone close to you, then you know that feeling.

As I kept reading, I wanted there to be a break for Tiger. I felt like every step she took was another steep uphill battle. One step forward and two steps back kind of struggle. It felt like her trial would never end.

On top of everything, Kathleen Glasgow’s writing is so poetic. It almost felt lyrical as she described how Tiger felt. It also felt like a mature teenager writing; it wasn’t overly young and it wasn’t too old. It moved the story forward in a natural way. I was surprised by what happened to Tiger in the end, but Kathleen Glasgow is good enough to hide that surprise until the end.

I really recommend this book if you’re into sad stories. You may not cry with catharsis, but it may bring up some long forgotten thoughts.

I received a copy of this book from Delacorte Press for free in exchange for an honest review. My opinions have not been influenced by the publisher or the author.