I’m a tad bit blocked recently and in more ways than one. Not only am I stuck with what to read next or enjoying my reads, but I’m also stuck creatively with my writing. So, I’ve decided to write about it. There’s nothing better than writing about your issues than thinking about them.

Perhaps these writer’s block moments will be a nice life update instead. It might be a little bit boring, or it might be fun. I don’t know, but hopefully it’ll help break this writing spell I’m under. Let’s see what’s been happening with my life.

It’s been pretty cold in LA

I moved to LA because I wanted to get away from the cold and desolation of New York. I’m not an entertainer or someone who wants to get famous, so my life in this city is a little less stressful than those who are trying to make it. The last time I visited here during the winter it was 90 degrees and super sunny. I was expecting this when moving here, but the weather has been…different. In fact, it’s been more rainy than it has been in New York. While the temperature isn’t as frigid, it feels that way when you’re not prepared for winter. We still have our puffy coats, gloves, hats, and mittens, but I’ve refused to take them out. This is not the city of puffy coats, but it doesn’t feel like the city I was expecting. I can’t wait until the Spring when hopefully it’ll be warmer.

I’m really excite about this. Bucky and I were discussing how we’ve been getting the travel itch lately. We went out with some friends to a local Irish pub to listen to music and while we were there, we talked about traveling. I know I never look excited about traveling, but I am. I just don’t chirp for joy and only think about logistics; hotel, airplanes, car rental, what to do, what to eat, what to see, etc. Having plans to visit San Diego really help with the travel itch. It’s only three hours away from us, plus we have friends out there. Bucky’s best friends will be coming out to SD too, so it’ll be a big fun affair. Have you ever gone traveling with another group of people? I’ve never done it. I usually travel alone or with one other person. It’ll be fun to see all the same faces, but in a different city.

I’ve rearranged my desk to include my TBR 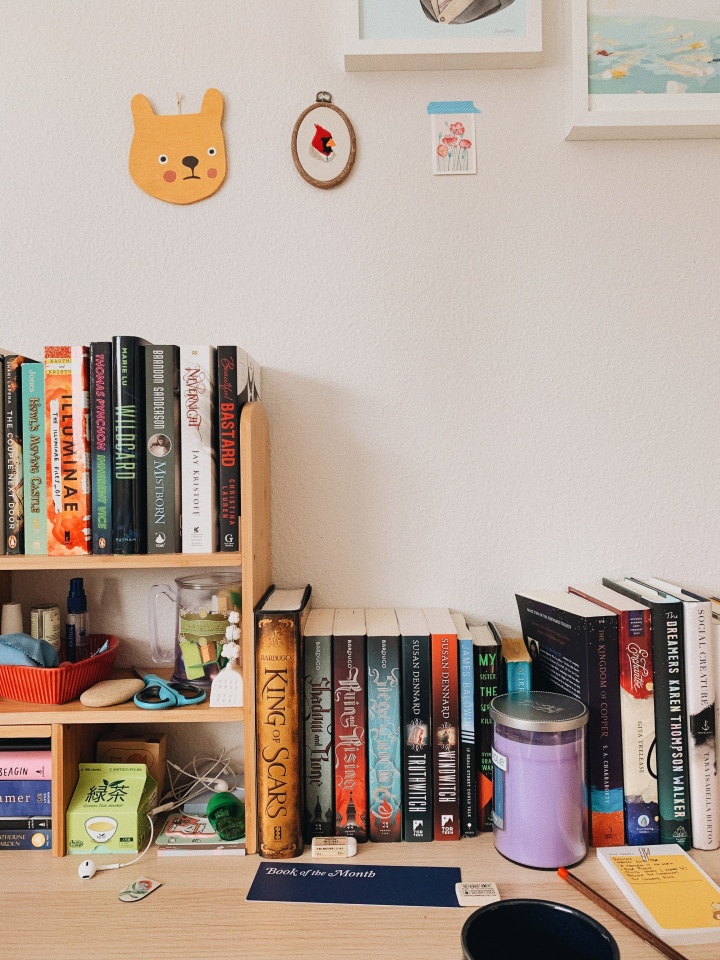 Recently I moved all the plants off my desk to a brighter spot in the house. They weren’t looking so great and I just love having books from my TBR sitting on my desk. It gives it a sense of dimension; if the dimension was some universe where books rule my life. Oh wait.

But now that I have books on my desk, it feels fuller. I would love to get a little shelf right above the books on the right. It’ll have more books on it, but maybe even some trinkets that didn’t make the desk. That’s right, having this many books on your desk means less cute stuff.

I’m a little nervous today because I’m going to the gym tomorrow for the first time in over nine months. When I first made working out a priority, I felt super great. But with the move and finding a gym, it’s been tough. Tomorrow I’m starting weight training, which isn’t easy but it’s also easier than many other workout regimes. Bucky thinks it’ll be good because I’m a lazy person who wants to eat anything I want and believes this will be the best workout for me. It’s an hour in the gym lifting weights and then back home to sit down and let the soreness subside. And somehow it lets you stay fit for the rest of your life. Who knew!

I randomly want February to end

I think I’ve been a bit beat up this month. Reading was a bust. Writing was terrible, so I’m ready for February to end and for March to begin. Only 28 more days.