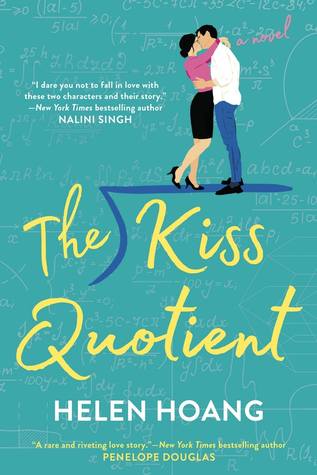 I approach this novel like it was another diverse read with a distinct voice from an Asian American author. What I got was a heck of a lot more. I’ve also got a cute trailer for the book I want to share. Check it out below!

Stella Lane thinks math is the only thing that unites the universe. She comes up with algorithms to predict customer purchases–a job that has given her more money than she knows what to do with, and way less experience in the dating department than the average thirty-year-old.

It doesn’t help that Stella has Asperger’s and French kissing reminds her of a shark getting its teeth cleaned by pilot fish. Her conclusion: she needs lots of practice–with a professional. Which is why she hires escort Michael Phan. The Vietnamese and Swedish stunner can’t afford to turn down Stella’s offer, and agrees to help her check off all the boxes on her lesson plan–from foreplay to more-than-missionary position…

Before long, Stella not only learns to appreciate his kisses, but to crave all the other things he’s making her feel. Soon, their no-nonsense partnership starts making a strange kind of sense. And the pattern that emerges will convince Stella that love is the best kind of logic…

The biggest thing I loved about this book is another diverse author writing a romance novel. This coming right off the heels of The Wedding Date by Jasmine Guillory who published earlier this year. It’s so great to read romance where other people of color fall in love. You know that happens for them too, right?

The book follows both Stella and Michael as they fall passionately in love with each other. Stella is a econometrist, which has something to do with math. Michael is a fashion designer turned male escort in order to help make ends meet. Stella hires Michael for a fun Friday evening to prove that she’s not some lame-o that works all the time.

First, I loved that the math geek was Stella and not Michael. It’s so easy to fall into the steel trap known as Asian stereotypes, but knowing that this book doesn’t have an Asian math whiz comforted me a little. I also loved that Michael was an Asian male escort. I rarely read books where men portray the sexual object of women, so it’s good to see that the roles were reversed here. An Asian hooker with a heart of gold meets a rich white woman with several little flaws.

Second, this is my first book about a character who is also on the spectrum written by a person who is autistic. At first, I was worried that this was going to be a huge issue. I didn’t want to like a book about someone with autism written by a person without autism. However, my fears were quelled when I read that Helen Hoang was diagnosed with autism much later in life. There literally is no way for someone to understand the ins and outs of living with anything unless you actually have it. John Green writes about his OCD. Nina LaCour writes about her sexual identity. Helen Hoang writes about her autism.

Reading a romance about a young Asian man falling in love is already branching outside of what people constantly read in romances. Having a female lead with autism is just another cherry on top of this romantic cake.

The reason why this is “important” (and I hate using that word) is because romance happens to everyone at any given time with anyone else. WE ALL FALL IN LOVE. There are songs about it. Movies about it. TV shows about it. When the entire world falls in love, you want to see the entire world reflected in those stories.

Representation matters and maybe there’s something who has been struggling with their social behavior their entire life from autism and suddenly they can see that they can fall in love to. They can have a perfectly normal relationship with another perfectly normal human being.

But I didn’t give this a perfect 5 stars. It’s more like a 4.5 star one. I really wanted to give it full marks, but I also had to keep objective with my critique. The only critique I could give it is the language. Maybe I’m a little bit too modern or literary, but I’m not a fan of the language used to describe their sex acts. Grabbing onto his sex, spilling, and other similar phrases just kind of quell up those old romance novel feel where everyone had quivering members and heaving bosoms. It might be because Helen Hoang grew up reading romance novels, but that kind of language just isn’t for me. I’m more of a literal person in that sense.

I received a copy of this book from Berkley for free in exchange for an honest review. My opinions have not been influenced by the publisher or the author.

7 thoughts on “The Kiss Quotient by Helen Hoang”