I bought way too many books this month and it’s only day 9! At this rate I’ll be building a fort and living in my books. Also I’ve been pretty lazy with reading and instead have been watching The Bachelorette. I’m still sore about the ending!

In an effort to keep myself in check and read more books, I’m making myself a TBR for August. I don’t normally do this because I feel like I always end up changing my mind or reading something else, but this month I’m determined to read all of these books. Don’t try to stop me, Smee!

It’s a pretty long list and it’s got some great reads. I know I won’t get through everything but at least I’ll get through most. Wish me luck!

You can find out more about the books I’m reading after the jump!

Centered on a community of immigrants who have traded their endangered lives as artists in China and Taiwan for the constant struggle of life at the poverty line in 1990s New York City, Zhang’s exhilarating collection examines the many ways that family and history can weigh us down and also lift us up. From the young woman coming to terms with her grandmother’s role in the Cultural Revolution to the daughter struggling to understand where her family ends and she begins, to the girl discovering the power of her body to inspire and destroy, these seven vibrant stories illuminate the complex and messy inner lives of girls struggling to define themselves. Fueled by Zhang’s singular voice and sly humor, this collection introduces Zhang as a bright and devastating force in literary fiction.

A few days after Christmas in a small suburb outside of L.A., pairs of a man’s pants hang from the trees. The pants belong to Howard Young, a prominent history professor, recently diagnosed with Alzheimer’s disease. Howard’s wife, Annie, summons their daughter, Ruth. Freshly disengaged from her fiance and still broken up about it, feeling that life has not turned out quite the way she planned, thirty-year-old Ruth quits her job and arrives home to find her parents’ situation worse than she’d realized. Her father is erratically lucid and her mother, a devoted and creative cook, sees the sources of memory loss in every pot and pan. But as Howard’s condition intensifies, the comedy in Ruth’s situation takes hold, gently transforming her grief. She throws herself into caretaking: cooking dementia-fighting meals (a feast of jellyfish!), researching supplements, anything to reignite her father’s once-notable memory. And when the university finally lets Howard go, Ruth and one of her father’s handsome former students take their efforts to help Howard one step too far. 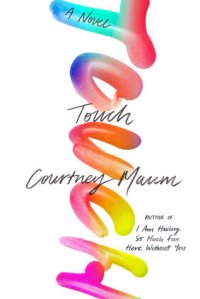 Sloane Jacobsen is the most powerful trend forecaster in the world (she was the foreseer of the swipe), and global fashion, lifestyle, and tech companies pay to hear her opinions about the future. Her recent forecasts on the family are unwavering: the world is over-populated, and with unemployment, college costs, and food prices all on the rise, having children is an extravagant indulgence.

So it’s no surprise when the tech giant Mammoth hires Sloane to lead their groundbreaking annual conference, celebrating the voluntarily childless. But not far into her contract, Sloane begins to sense the undeniable signs of a movement against electronics that will see people embracing compassion, empathy, and in-personism again. She’s struggling with the fact that her predictions are hopelessly out of sync with her employer’s mission and that her closest personal relationship is with her self-driving car when her partner, the French neo-sensualist Roman Bellard, reveals that he is about to publish an op-ed on the death of penetrative sex a post-sexual treatise that instantly goes viral. Despite the risks to her professional reputation, Sloane is nevertheless convinced that her instincts are the right ones, and goes on a quest to defend real life human interaction, while finally allowing in the love and connectedness she’s long been denying herself.

Eat Only When You’re Hungry by Lindsay Hunter

In Lindsay Hunter’s achingly funny, fiercely honest second novel, Eat Only When You’re Hungry, we meet Greg—an overweight fifty-eight-year-old and the father of Greg Junior, GJ, who has been missing for three weeks. GJ’s been an addict his whole adult life, disappearing for days at a time, but for some reason this absence feels different, and Greg has convinced himself that he’s the only one who can find his son. So he rents an RV and drives from his home in West Virginia to the outskirts of Orlando, Florida, the last place GJ was seen. As we travel down the streets of the bizarroland that is Florida, the urgency to find GJ slowly recedes into the background, and the truths about Greg’s mistakes—as a father, a husband, a man—are uncovered.

In Eat Only When You’re Hungry, Hunter elicits complex sympathy for her characters, asking the reader to take a closer look at the way we think about addiction—why we demonize the junkie but turn a blind eye to drinking a little too much or eating too much—and the fallout of failing ourselves.

Things That Happened Before the Earthquake by Chiara Barzini 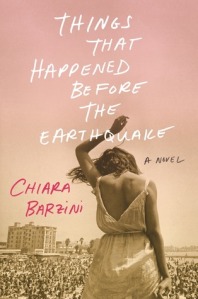 Mere weeks after the 1992 riots that laid waste to Los Angeles, Eugenia, a typical Italian teenager, is rudely yanked from her privileged Roman milieu by her hippieish filmmaker parents and transplanted to the strange suburban world of the San Fernando Valley. With only the Virgin Mary to call on for guidance as her parents struggle to make it big, Hollywood fashion, she must navigate her huge new public high school, complete with Crips and Bloods and Persian gang members, and a car-based environment of 99-cent stores and obscure fast-food franchises and all-night raves. She forges friendships with Henry, who runs his mother’s movie memorabilia store, and the bewitching Deva, who introduces her to the alternate cultural universe that is Topanga Canyon. And then the 1994 earthquake rocks the foundations not only of Eugenia’s home but of the future she’d been imagining for herself.

Little and Lion by Brandy Colbert

When Suzette comes home to Los Angeles from her boarding school in New England, she isn’t sure if she’ll ever want to go back. L.A. is where her friends and family are (along with her crush, Emil). And her stepbrother, Lionel, who has been diagnosed with bipolar disorder, needs her emotional support.

But as she settles into her old life, Suzette finds herself falling for someone new…the same girl her brother is in love with. When Lionel’s disorder spirals out of control, Suzette is forced to confront her past mistakes and find a way to help her brother before he hurts himself–or worse.

Everything Belongs to Us by Yoojin Grace Wuertz

For childhood friends Jisun and Namin, the stakes couldn’t be more different. Jisun, the daughter of a powerful business mogul, grew up on a mountainside estate with lush gardens and a dedicated chauffeur. Namin’s parents run a tented food cart from dawn to curfew. Her sister works in a shoe factory. Now Jisun wants as little to do with her father’s world as possible, abandoning her schoolwork in favor of the underground activist movement, while Namin studies tirelessly in the service of one goal: to launch herself and her family out of poverty.

But everything changes when Jisun and Namin meet an ambitious, charming student named Sunam, whose need to please his family has led him to a prestigious club: the Circle. Under the influence of his mentor, Juno, a manipulative social climber, Sunam becomes entangled with both women, as they all make choices that will change their lives forever.

Watch Me Disappear by Janelle Brown

It’s been a year since Billie Flanagan—a beautiful, charismatic Berkeley mom with an enviable life—went on a solo hike in Desolation Wilderness and vanished from the trail. No body—only a hiking boot—has ever been found. Billie’s husband and teenage daughter cope with her death the best they can: Jonathan drinks, Olive grows remote.

But then Olive starts having waking dreams—or are they hallucinations?—that her mother is still alive. Jonathan worries about Olive’s emotional stability, until he starts unearthing secrets from Billie’s past that bring into question everything he thought he knew about his wife. Together, Olive and Jonathan embark on a quest for the truth—about Billie, their family, and the stories we tell ourselves about the people we love.

Happy Mid-Autumn or Chuseok or Moon festival! Thanks @harpervoyagerus for the gifted book. #DaughterOfTheMoonGoddess
What’s one thing you’re looking forward to this week?
Happy weekend everyone! Who’s glad it’s finally here? I know I am lol.
What’s your favorite season?
Scenes from an unfinished breakfast. How was your morning?
What would you do if you accidentally unleashed an angry spirit that went after your sibling? I would definitely do anything for my sister, even if I was the person who accidentally put her in that situation. I'm currently reading Pahua and the Soul Stealer by @LoriMLee82, and that's what happens to Pahua in this funny and fast-paced adventure based on Hmong mythology. Thanks to @readriordan for the gifted book. #RickRiordanPresents #ad