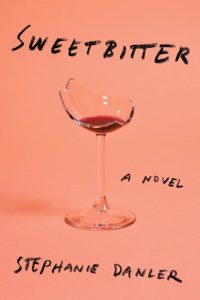 I’ve read a lot of coming-of-age stories in my lifetime. I’m still reading a lot of coming of age stories because at 31, I don’t know if I’ve actually “come of age.” I don’t think I will ever stop reading them or never not want to pick one up. However, there’s some stories where I start to lose focus or empathy for the main character and their troubled post-graduate life. Currently, that book is Sweetbitter.

In a nutshell, Sweetbitter is a novel by Stephanie Danler about a young woman who moves to New York City after college. She finds herself an apartment, gets a job at a restaurant, and contemplating what her next move will be. It sounds like your typical story of growing up and experiencing growing up in the big city.

I picked up this book at my bookstore a few months ago excited to read something about food, the restaurant industry, and a side of growing up. When I first read it, I was swept away by the language and the writing skills Danler uses to portray her character. The descriptions of the food and how it tasted to her character and the depth of knowledge that some of her characters had was a beautiful amalgamation.

However, this book wasn’t the story I thought it was going to be. Instead, it felt like I was reading the typical Girls story where they don’t know what they’re doing, don’t care about the job they have, and therefore don’t have the competency to do the job right.

It reminds me of this scene from Girls where you watch Lena Dunham’s character break down a box at a law office she’s working at part time. I get that coming right out of college and moving to a big city is tough. I did the same thing. After college, I moved into my first apartment in the East Village with no assistance from my parents. I made a lot of junk meals and worked in customer service. I wasn’t sure what my plan was going to be and that was fine. I used my intuition and brain to learn to adapt, pay my bills, and actually have some money leftover at the end of the week to go out at night. It’s not a romantic life and not something that we should be praising as interesting or heroic. It’s just a temporary blur of time where no one knows what they’re doing.

I don’t relate to girls like Lena Dunham’s character or the main character in Sweetbitter because while I was wondering what I want to do with life, I didn’t spend my time clumsily serving food and not understanding that when a guy didn’t like me, I should continue to pursue them. It’s not innate in me to act this, but I do know that there are a ton of post-graduates living in Williamsburg going through the same thing. I know this because I live in Williamsburg. Hah, that might also be the reason why I’m so determined not to like this book.

I don’t want to bash this book. I think that many people will enjoy this story and I’m in the minority of people who huffed, said “another one?” and promptly put the book down. I don’t like stories about people who come to New York, transplant themselves in Williamsburg, and then do nothing but drink and do drugs and live a “lifestyle” instead of a life.

I put down the book halfway through. I hate doing that, but I realized that I wasn’t really invested in knowing what happens to the main character here. Perhaps the story gets better. Perhaps she finally pulls up her boots and does her best with the situation she’s given. Perhaps I need to be more forgiving of the world and their faults. I’ll never know what happened and to be honest, I think I’m ok with that.