Once upon a time there was a sea filled with endless possibilities, sweeping sagas, and stories; so many stories. But one day something happened to the sea leaving it stuck with stories but no endings. People thought this to be a scary change in the sea of possibility and decided to close the doors to its beautiful world. However, the sea is always trying to finish its stories. Then Zachary Ezra Rawlings showed up.

The Starless Sea follows Zachary Ezra Rawlings. For all intents and purposes, he’s your average grad student writing his thesis on video games and how they relate to stories. One day, he finds himself reading through the fiction section of his university library when he comes across a strange book called Sweet Sorrows. Curious to its contents, he checks the book out only to find one of the stories to be a memory of his when he was a kid; a moment where he encountered a painted door in the alleyway near his mother’s fortune telling store. A moment where he wished he opened that door, but never did and then the next day, it was gone. He couldn’t believe a book that looks older than him has a story about him in it. Keeping that in mind, he investigates further only to find himself at a posh literary party in Manhattan. From there, he dives deeper into a world filled with magic and fantasy revealing something much bigger than he imagined from a book.

But Zachary isn’t the only person who knows about the Starless Sea. There are others; those trying to protect the sea and others welcoming newcomers like Zachary to enter and create new stories. The protectors have been destroying doors like the one Zachary encountered as a kid. The others continue to paint them. But the real battle is not between those with varying belief systems. The real fight is with the sea itself.

OMG I’m shook. I can already see how this book will be loved by many and disliked by others. It’s not an easy book with a level of cerebral writing that will leave you scratching your head. But, if you give it a chance then it will reward you.

This book is a combination of Alice in Wonderland and The Neverending Story and all the books where characters stumble down into these magical worlds beyond their average day. However, the difference in this story is that Zachary stumbles into his own story.

If you’re a fan of magical worlds and destiny, then this is the book for you. Erin Morgenstern’s really outdone herself with this one creating a place more beautiful than The Night Circus. It’s completely different from The Night Circus, but the world built is something I would have never imagined. With complex prose and tons of imagery, you will most definitely get lost in this world because I got lost in it.

I will be honest that I was so confused by what was going on most of the time. At the halfway point, I almost considered DNF-ing the book because nothing had happened and nothing was explained. There’s a lot of details still missing and some of the jumping between stories really made it difficult to keep track of what was going on. The detailed descriptions of some passages made the book much slower than it already was. You leave the book with more questions than you started with and that’s never a good feeling.

However, because I’ve read Erin Morgenstern’s work before, I kept on reading because I knew there would be a bigger reason for everything she was handing us and there truly was. I’m so glad that I did because despite the ending not giving me all the answers, it was completely unimaginable and a level of fantasy I’ve never read before.

If anything, you need to let go of everything you understand about a good story. You have to let Erin Morgenstern guide you. Put your hand in hers. Close your eyes and let her take you on this magical journey. Take it slowly. Read the pages and really read the words. You won’t finish the book knowing everything happening, but there’s enough there to have an understanding and she’s built a world you just can’t forget.

And while I sat completely confused the entire time I was reading, I was so intrigued. I continued reading because I wanted to know what the Starless Sea was. I wanted to know where Sweet Sorrows came from and learn about Fate and Time. Like I said before, you’ll finish this book with not a lot more info on what happened, but you get the idea and the idea is gorgeous.

Seriously, it’s the magic you wish you can see in the real world. It’s that letter to Hogwarts finally making it to your door. It’s being imbued with magic powers on your 16th birthday. It’s everything I’ve ever dreamed of happening to me when I was a little kid (and tbh, as an adult); entering a world where the impossible is possible and magic is most definitely real and here to create your own story for you. 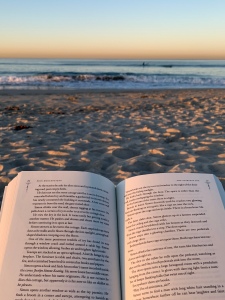 I think in the end, the story is this: Magic is everywhere. Stories are everywhere. Once one story ends, another begins. You just have to be the type of person willing to see the seams of it in the reality of the world. I honestly feel like Erin Morgenstern’s approach was to allow the reader to imagine the world and become a part of the story as well.

So is it worth the hype? Overall, a beautiful story but I can see a lot of people either DNFing the book or not liking it in the end. It’s high concept for sure, but it’ll leave you breathless at the end. Proceed with that in mind, but if I can encourage you, please read this whole book. This goes double if you love the world of magic that books brings to your life.

I received a copy of this book from Doubleday for free in exchange for an honest review. My opinions have not been influenced by the publisher or the author.