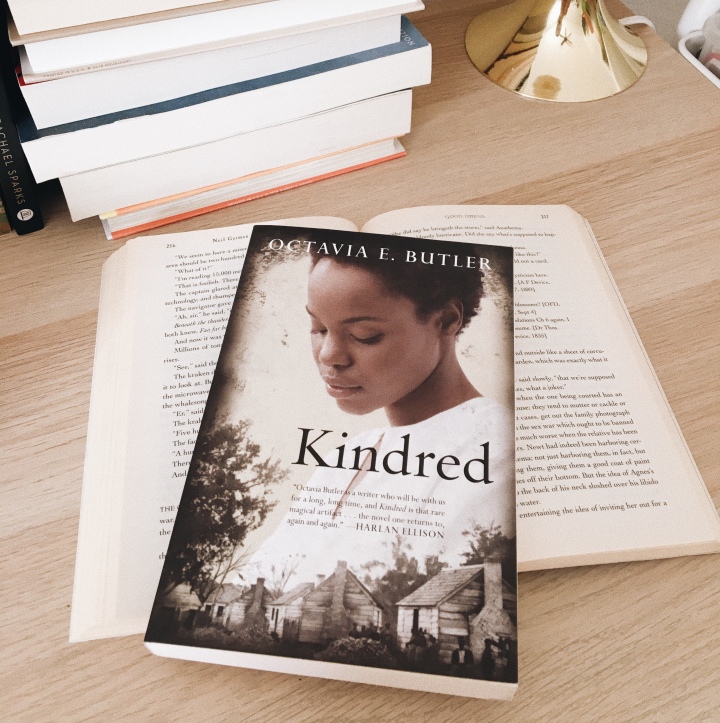 Today is a very special Wednesday because not only is it the day I share my current reads with you, but this read is also an author spotlight of mine for November.

Octavia Butler has been on my reading list since I bought this Mind of My Mind t-shirt from Out of Print Clothing. I recall feeling a little sheepish buying a t-shirt of a book I’ve never heard of. However, I told myself that I would eventually read Octavia Butler and that time has finally come. I’m a huge fan of science fiction and fantasy especially when they’re written by women and women of color. Science fiction still feels like that one of those genres that’s dominated by white men and so I try my best to mix it up and include other authors of the genre.

However, what I’m learning about Octavia Butler has been blowing my mind.

For my What I’m Reading Wednesdays, I’ll be exploring this genre and how that works with one of Octavia Butler’s iconic works, Kindred. I honestly feel like I’m learning so much just by picking up her novel. Here’s more on Kindred:

The first science fiction written by a black woman, Kindred has become a cornerstone of black American literature. This combination of slave memoir, fantasy, and historical fiction is a novel of rich literary complexity.

Having just celebrated her 26th birthday in 1976 California, Dana, an African-American woman, is suddenly and inexplicably wrenched through time into antebellum Maryland. After saving a drowning white boy there, she finds herself staring into the barrel of a shotgun and is transported back to the present just in time to save her life.

During numerous such time-defying episodes with the same young man, she realizes the challenge she’s been given: to protect this young slaveholder until he can father her own great-grandmother.

So this book is hitting all my science fiction needs. It’s got time travel, which in and of itself is paradoxical. It’s got a young African-American woman as the main character. It has her traveling back in time to a very poignant time in African-American history.

I think I’m about to have my mind blown. Will you be reading along with me?

You can find KINDRED on Amazon.