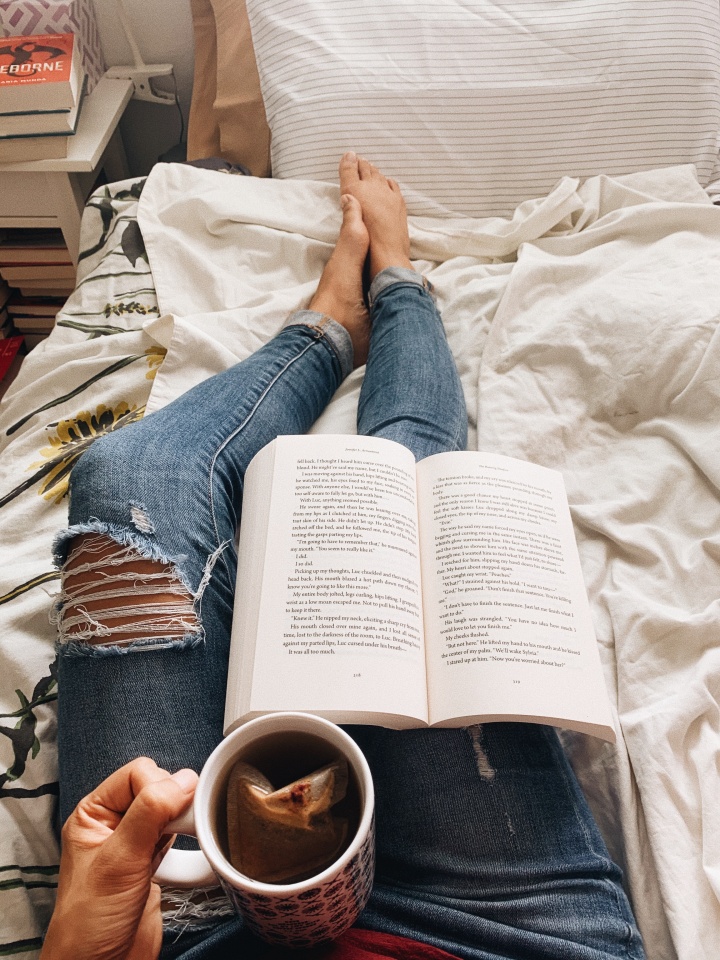 This was my first Talia Hibbert book. I know from my paranormal romance research that Talia Hibbert is more known for her steamy novels with hunky bros on the cover. But the one thing that really drew me to Talia Hibbert is her effort to create diverse romance stories. Not only does she cover diverse characters, but she has inter-racial relationships which is where my real-life relationship falls into.

So naturally, I gravitated towards Chloe Brown and what I received was an amazing romance between two complicated people who found each other.

“Once upon a time, Chloe Brown died.” is the first sentence you read when starting Get a Life, Chloe Brown. The good news is that she didn’t die, but the experience of near death left her with chronic pain and fibromyalgia. Sadly, it also meant losing her boyfriend, losing her friends, and shutting herself inside because the pain was too much to manage. As a way to get her life back, Chloe made a list –her “get a life” list including things she wouldn’t normally do, but will hopefully give her the life she once had again.

As a way to get her family off her back, she moves into an apartment complex where she works as a web designer. Money isn’t the most important thing to her as she comes from a wealthy family, but she loves the freedom to be on her own especially with her hot superintendent, Red, painting shirtless by his window every night. But Red can’t really stand Chloe. He doesn’t like her snooty attitude, her wealthy family, and the fact that she addresses him as Mr. Redford Morgan, so he avoids her as much as possible despite the fact he knows she watches him paint at night.

After rescuing a stray cat from a tree together, Chloe and Red start an unlikely friendship that eventually turns to love. This one felt really centered around the relationship between Red and Chloe. It’s an enemies-to-lovers story and despite there being some conflict throughout, it was only really enough to fuel the dynamics of their relationship.

There are so many features of this story that I absolutely loved and the reason why I gave it such a high rating. While the story itself is quite charming and very focused on the relationship between Chloe and Red, Talia Hibbert also included chronic illness, mental health issues, abusive relationships, and don’t forget diverse characters. Talia Hibbert expertly incorporates these themes without taking away from the story. I love the subtle nods to immigrants and being a person of color and how natural Chloe and Red learn about each other as the story moves on. It keeps the story flowing, but also makes the characters seem so much more real.

I absolutely loved Chloe and Red. Both characters felt like real people with real issues. Honestly, the banter and play teasing between the two felt like the relationship my husband and I have. I also loved that Chloe came from a wealthy immigrant family in England. OMG yes! Bring me all the stereotype bashing you can because it fills me with joy. Chloe is also this amazingly quirky girl and what I absolutely loved about her character is that she’s not the “ditzy” manic-pixie-dream-girl, but someone with real issues who need to manage pain on a daily basis.

I also loved Red and the amount of growth he makes in this story. I love that he’s an artist struggling with his self-confidence because it reminds me a lot of myself and the struggles I have with my own confidence. He’s got that bad boy feel about him with his interest in art and his tattoos, but he’s so far from bad. He’s like the perfect dude who does something really edgy and has his own problems, but also deeply cares.

This book also made me cry. Yep, I shed tears which gives any book instant approval because books don’t normally make me cry. I won’t share with you when I did the tearing up (I don’t want to spoil it), but let’s just say that the emotions were so real.

And I’m not done! The last thing I want to mention is the steam factor. Talia Hibbert is unafraid to share those steamy scenes in very deep detail. If you’re wary about steamy scenes, just a warning that there are two very open-door moments that even left me blushing.

The only thing I could harp on is the fact the story didn’t really have a plot. While I thought maybe the list Chloe put together would be what they accomplish together, it came into play really late in the book and I almost thought it would be forgotten all together. However, it doesn’t take away from the story itself. The story is still interesting despite not having a defined plot, but I do wish there was more adventure between the two of them.

Overall, an amazing story and I’m now an instant fan of Talia Hibbert’s. I can’t wait for the second book in this series and I might check out her other hunky dude reads in the future.

I received a copy of this book from Avon Books for free in exchange for an honest review. My opinions have not been influenced by the publisher or the author.

One thought on “Get a Life, Chloe Brown by Talia Hibbert // Book Review”

There was an error retrieving images from Instagram. An attempt will be remade in a few minutes.