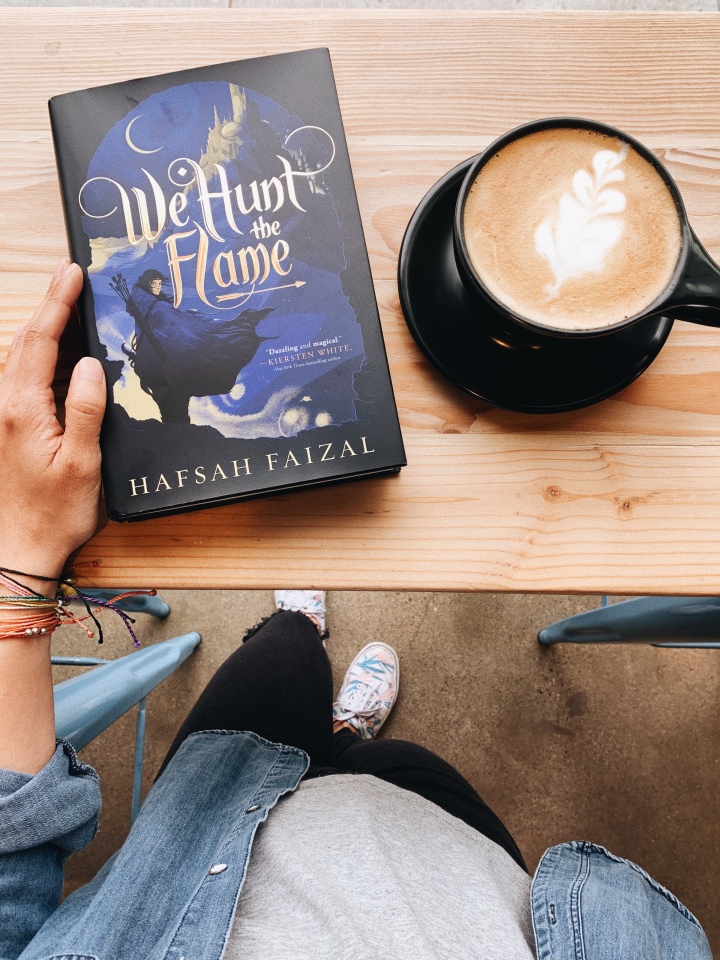 With this book, I wanted to take my time. I’d heard online that Hafsah Faizal is a super lyrical writer and so I knew I would need time with this book. I also been feeling super burnt out by work books and wanted to read something that didn’t require a book review due quickly after. It was the best reading vacation anyone could ask for because this book was phenomenal. Let’s get into it:

Let’s start off with a big sweeping overview of the world. It’s set in an Arabic land where magic used to exist, but since the Six Sisters of Old left the magic has left the land in an endless winter and a terrible forest eating away at the land. Zafira is a young huntress who goes into this terrible forest to find food for her village. She goes alone because most folks who travel into the forest come out mentally insane and for some reason, she’s the only one who can get in and out of the forest without a scratch on her. Nasir is the king’s son, but also known as the Prince of Death. He gets this title because he’s the king’s assassin. He does what he’s told and despite the small glimmers of help he provides his friends, the king only cares that he gets the job done.

When a witch visits Zafira, she’s asked to travel to Sharr, an island in the middle of their world where the last remnants of magic is stored. The journey is treacherous including a trip through this crazy forest, but the outcome means the end of the forest, no more snow, and magic being available in the world again. However, the king has other plans as he sends Nasir to go after the huntress and steal the magic she’s about to claim back. With a ragtag group following them as they make their journey and tragedy around every corner, the journey to Sharr is riddled with trouble and a ton of secrets unfold.

I legit wrote in my notes “if you’re a fan of revealing truths, this is the book for you.” Seriously, Hafsah Faizal’s written a soap opera within the pages of a YA Fantasy and there’s nothing wrong with that. The book reveals more and more secrets as you go along and they just get juicier and juicier the closer you get to the end. And it gets better all the way at the end. I won’t go into the details here because spoilers, but just be prepared for all the surprises.

Like I wrote earlier, take your time with this one. It’s a slow burner and while you won’t be bored, it will take time to slowly get to the good stuff. There were a few scenes I thought were a little redundant like the scenes spent just roaming the desert. I also thought it was weird that Zafira just felt where the magic was and went right to it. It felt disjointed rather than smoothly seeing her journey towards the magic. The camping out scenes were a little slow, but again they weren’t taking away from the novel. If anything, they were adding to it.

I most definitely ship Zafira and Nasir. Holy crow! While I know these two are highly mismatched and tbh shouldn’t be together, I think Zafira’s strength and Nasir’s vulnerability work together here and create a beautiful relationship based on mutual respect than a friends-to-lovers or alpha male storyline.

I think my favorite part of the book is the inclusion of Arabic words and legend. Hafsah Faizal seamlessly includes these bits of her culture into the story and it really gives it a beautiful backdrop. I know a lot of people were confused by some of the language and words, but shukran to Hafsah for being brave and including it. I honestly loved it and really made it more authentic.

Despite all the secrets being revealed, it was also a great debut novel by a debut author and the first in a duology by Hafsah Faizal. I think a duology is perfect for this kind of story especially since the premise feels limited.

I received a copy of this book from Fierce Reads for free in exchange for an honest review. My opinions have not been influenced by the publisher or the author.