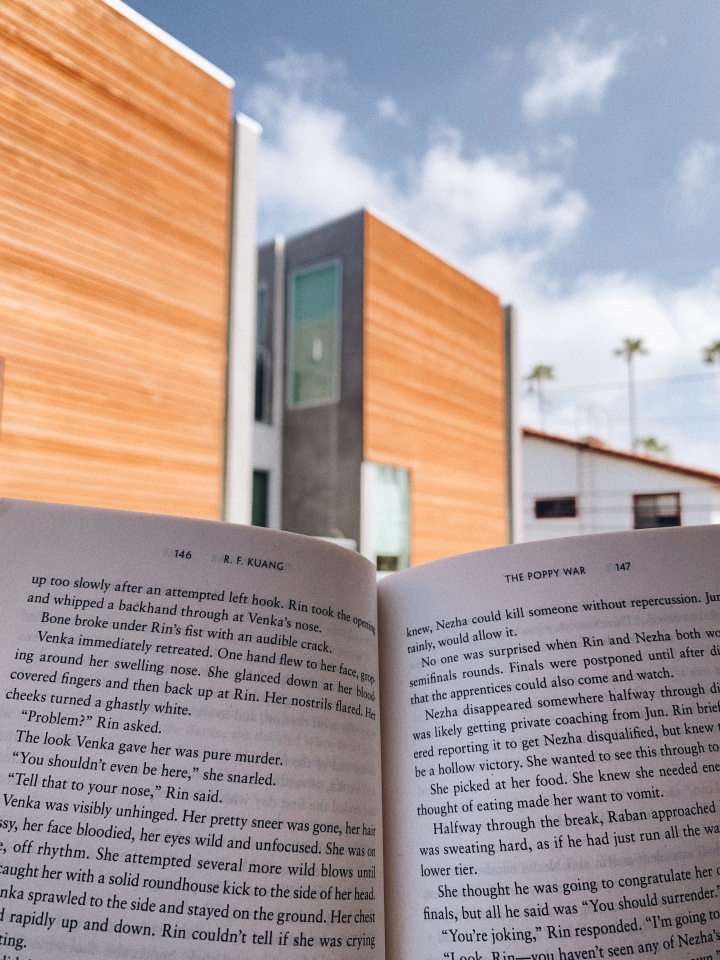 I started reading The Poppy War because a ton of my friends online were saying this was the best fantasy novel they’ve read. You know me, I have to investigate the hype of any book when it sounds like that. I’ve never read a military fantasy before. I thought I might have, but according to the Internet your character needs to be in the military doing military things strategizing for a big old war. And this definitely falls into that category.

TW: This book discusses brutal battles with a lot of gore. There are also discussion and usage of drugs like heroin, mushrooms, and opium. There’s some discussion about rape and sexual assault, so FYI in case you’re super sensitive to those topics.

The book is about a young girl named Rin who is about to be married off to an old rich man. Because that’s not the life she wants, she decides to study for a placement test and joins Sinegard’s elite military school. For all intents and purposes, she has no training, no education, and no family. She enters the school and told that her class needs to pass some vigorous tests before they can actually stay at the school. The first year is spent learning everything she can to face and fight other students for a position.

She comes to know Jiang, the Lore teacher and drug addict. He believes in a faith where the gods imbue you with their powers and you act as a conduit to unleash those powers. However, in order to rise to the level of the gods, you need to take strong opiates like heroin or opium.

As Rin is in school with her classmates and friends, the war between the Federation and the Empire begins. Since this is the military school, everyone is immediately deployed to different regimes. Rin, because of her abilities to access fire power from the Phoenix god, she’s assigned to the 13th regime, a group specially assembled to do the Empress’s dirty work. They’re not regarded as the elite team even though they have the most power. Instead, it’s a misfit group of opium addicts slowly going insane from the usage of the drug and access to their power. However, they’re the most powerful and led by Altan, the strongest and last known Speerly to exist after the second Poppy War.

With this group, they begin the big fight to preserve their country from the Mugen Federation only to find some surprising truths about their world.

If you’re new to fantasy, this might be an easy book to digest. There isn’t a lot of usage of magic and other fantasy elements and focuses more on the military aspects of the story. It also uses real-life events that you can easily google if you need to brought back down to Earth. However, I think you’ll enjoy this one as a nice entry to the fantasy universe.

The main part I absolutely loved is that this book is the origin story of a villain. I didn’t realize this until my friend Sachi pointed it out to me, but it all makes sense. All the moments in Rin’s life that I brushed off are now blinking at me like red lights. The murders, the hunger for power; it all feels like Rin is on her way to being a terrible villain. However, what’s difficult to really comprehend is that she has justification for everything she’s done. It’s not good justification, but when you’re looking for revenge or freedom there’s a level of evil you need to get. That’s exactly what Rin does and hopefully doesn’t become her fate.

Most of this book is about Rin’s time in school before diving into the war. The war scenes were brutal even using scenes from The Raping of Nanking to share the devastation of one particular town.

But I absolutely love that RF Kuang used events from the Sino-Japanese War and The Rape of Nanking to create this universe. I was reading online how many military fantasy authors use events from actual wars, but mainly from European-centric wars. So it’s nice to see someone explore some other wars happening in another part of the world.

The characters are all so lovable and carry their own issues and personalities. I have my favorites and my not-favorites, but Rin has two main friend groups in this book. I guess they’re not actually friends, but comrades in the same fight. I just love that she becomes friends with her, tell her when she’s being too much, and never turns their back on her.

The part I didn’t like was the ending. I don’t want to spoil what happens, but I will say that it felt too easy. You know me, I have to have my endings feel real otherwise I pull out of my imagination and just think of reasons why the author decided to go the way they did. I hate being pulled out of the fantasy right at the ending.

But aside from that, it’s a great military fantasy with a lot of great relationships, great description, and tons of action.

Have you read this one yet? What did you think?

5 thoughts on “The Poppy War by RF Kuang // Review”