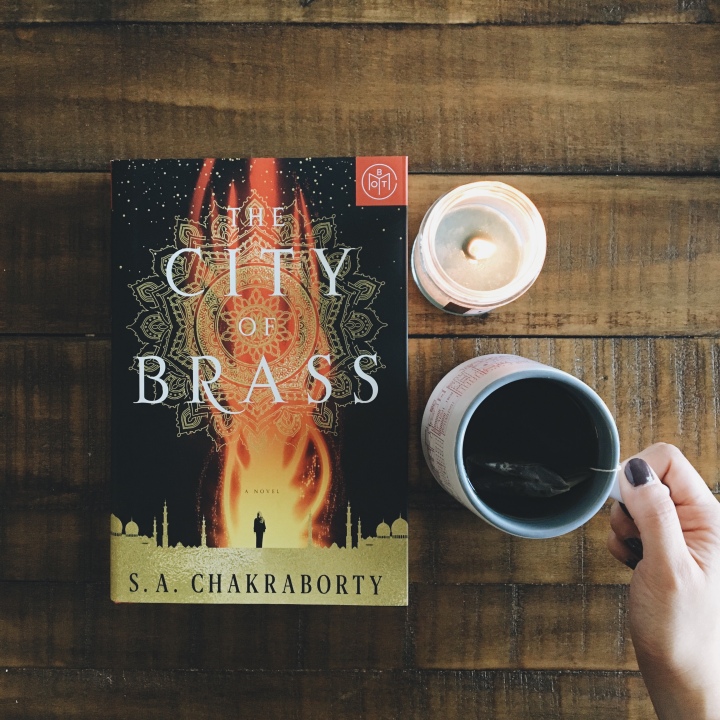 An epic fantasy with daring sword fights, magic spells, but no prince in disguise. This is a book you’ll want to read, fall in love with, and hopefully see it turn into a movie.

Nahri has never believed in magic. Certainly, she has power; on the streets of 18th century Cairo, she’s a con woman of unsurpassed talent. But she knows better than anyone that the trade she uses to get by—palm readings, zars, healings—are all tricks, sleights of hand, learned skills; a means to the delightful end of swindling Ottoman nobles.

But when Nahri accidentally summons an equally sly, darkly mysterious djinn warrior to her side during one of her cons, she’s forced to accept that the magical world she thought only existed in childhood stories is real. For the warrior tells her a new tale: across hot, windswept sands teeming with creatures of fire, and rivers where the mythical marid sleep; past ruins of once-magnificent human metropolises, and mountains where the circling hawks are not what they seem, lies Daevabad, the legendary city of brass?a city to which Nahri is irrevocably bound.

In that city, behind gilded brass walls laced with enchantments, behind the six gates of the six djinn tribes, old resentments are simmering. And when Nahri decides to enter this world, she learns that true power is fierce and brutal. That magic cannot shield her from the dangerous web of court politics. That even the cleverest of schemes can have deadly consequences.

It’s kind of tough for me to put into words how much I liked this book. While it did have its flaws and it wasn’t the most perfect read, I still enjoyed it. I wanted to read this book in particular because it takes place in the Middle East and that’s one of the areas I wanted to focus reading this year.

From the synopsis of this book, you would think that this is a simple tale about a young woman who finds herself in a magical universe right in the middle of Cairo. However, this book is way more than what this story tells you. The book is deeply steeped in Middle Eastern culture, folklore, history, and there is also some hints at Islam as well.

In its essence, this is a book about the power struggle between two tribes of the Daeva. One group called the daeva believe in the power of fire while the other group, the djinn, don’t. This division between the two groups of people causes for some massive political and social issues amongst the people. Let’s not even get into the half-human born folks that live in Daevabad as well.

What I personally loved was Nahri. She’s a daeva born into the human world and lived on the streets her entire life. She’s a thief and a liar and she knows nothing about the powers she possesses aside from the occasional wound healing very quickly. When she summons Dara, her Afshin, he whisks her away to the world she belongs.

As you can see, there’s obviously some issues with someone who grew up in the human world coming to a world made up of magical beings. This goes double for someone who can heal and bring something to the world that’s been missing for a few years.

I loved reading this part of the book because you get to learn about these worlds alongside Nahri. You get to see her thoughts and how she reacts and her reactions were completely natural.

The epic battles throughout the story were also well created and thought out. I can see the fights in my head between the people and the emotions were definitely prevalent in the reads. These were some of the parts that really drew me into the story, made me care about these characters, and eventually made me want to read more.

It took me a while to get right into the book mostly because the world building was a little off. SA Chakraborty would explain a concept of the daevas or the djinn to you, which was a little confusing. However, then you see Nahri ask the same questions you asked yourself and suddenly everything makes sense.

Nahri and Dara don’t arrive in Daevabad until halfway through the book. In my opinion, I feel like it should have been sooner so that we can learn alongside Nahri all the little details about the world. I had to do a lot of googling to understand the certain weapons they used, the origins of the djinn and daevas (there’s an origin and you can look it up!), and even some of the Arabic phrases she threw in there every once in a while.

There is also an issue with the wording of things. Whenever Chakraborty introduced a new point in the plot, it was really confusing and I needed to read it a few times over to understand it. It may have been the way I was reading, but it definitely threw me off and pulled my final star. Even though the world building was a little confusing for me, it was immediately nullified by the elaborate writing, the action and adventure of it all, and reading about a world that I don’t regularly read.

The end of the book got me hooked and I will admit, I shed a few tears. I know this is the first book from a debut author with another book in this series coming soon. The first books are always the toughest, but if they grab you enough, then you’ll definitely want to read the second. I will definitely be looking out for the second book in the future.

2 thoughts on “The City of Brass by S.A. Chakraborty”